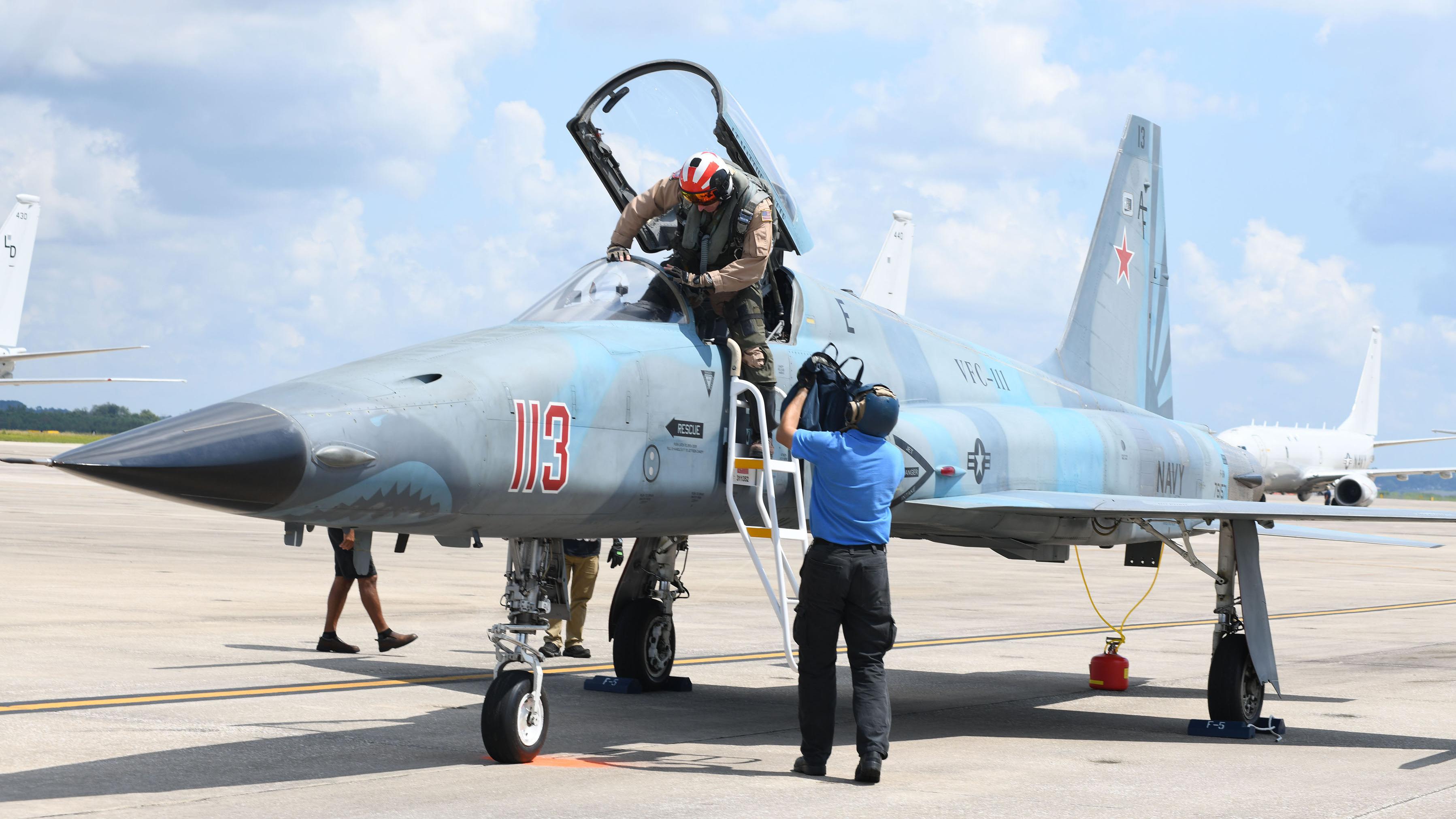 Charles Singer, a Fleet Readiness Center Southeast’s aircraft systems inspector, helps Commander Matt Pearce, an F-5N Tiger II pilot with Fighter Squadron Composite 111 (VFC-111) Sun Downers based out of Naval Air Station Key West, Fla., with his bags as he disembarks after delivering the first F-5 to FRCSE. FRCSE has been named the depot source of repair for F-5 aircraft for the Navy and Marine Corps. (U.S. Navy photo released)

As the aircraft taxied, trumped in size by the P-8s it passed on the flight line, it showcased its most anticipated attributes.

“What we don’t have in technology, we make up in tactics and knowledge,” Pearce said. “Once you take your eyes off of us outside of a mile to a mile and a half, it’s very hard to pick us back up.”

Plainly put, by training an F/A-18 pilot in a jet used by the adversary in combat, he or she learns how to outwit and out maneuver the enemy. Once tactical skills are mastered using a hands-on approach, take that same pilot, put him or her in a superior aircraft and expect a well-rounded aviator who can rip a hole in the sky.

For FRCSE, it was an ideal time to take on the adversarial aircraft’s workload. As the depot phases out the P-3 Orion, a larger, four-engine maritime surveillance plane, artisans that formerly maintained them will transition to the fighter.

“It is great for FRCSE to be able to transition the workforce to a different platform,” said Bill Robinson, FRCSE F-5 program manager. “We’ll do a full depot maintenance on the aircraft.”

“That means a lot of inspection, parts replaced as required, reconditioning and repainting,” Robinson said. “So, basically we return the jet to the fleet ready to use for another four years.”

With an expected turn-around time of 180 days at nine to 10 aircraft per year, Robinson is confident in the staff’s ability to provide exceptional work that ensures warfighter readiness.

“They are skilled artisans. They’re used to working on aircraft,” he said. “There will be some learning curve involved, but they’ll pick up very quickly.”

The group that’s gathered, dressed in ear and eye protection, watches as the pilot methodically commands the jet to take its last jog to the left, aligns it perfectly to the spot assigned and powers it off.

The muscle of this machine and the importance of conducting the maintenance required is emphasized by the day’s anniversary. Eighteen years after 9/11, readiness reigns supreme for our military and the organizations that support it, and it can only be attained because of the joint effort among the warfighter, service members and depots.

“It was a big day in history for the United States,” Pearce said. “We didn’t expect it to happen on Sept. 10, but it did and we had to be ready to go. We can’t just draw down the forces during times of peace because you never know when that’s going to happen.” 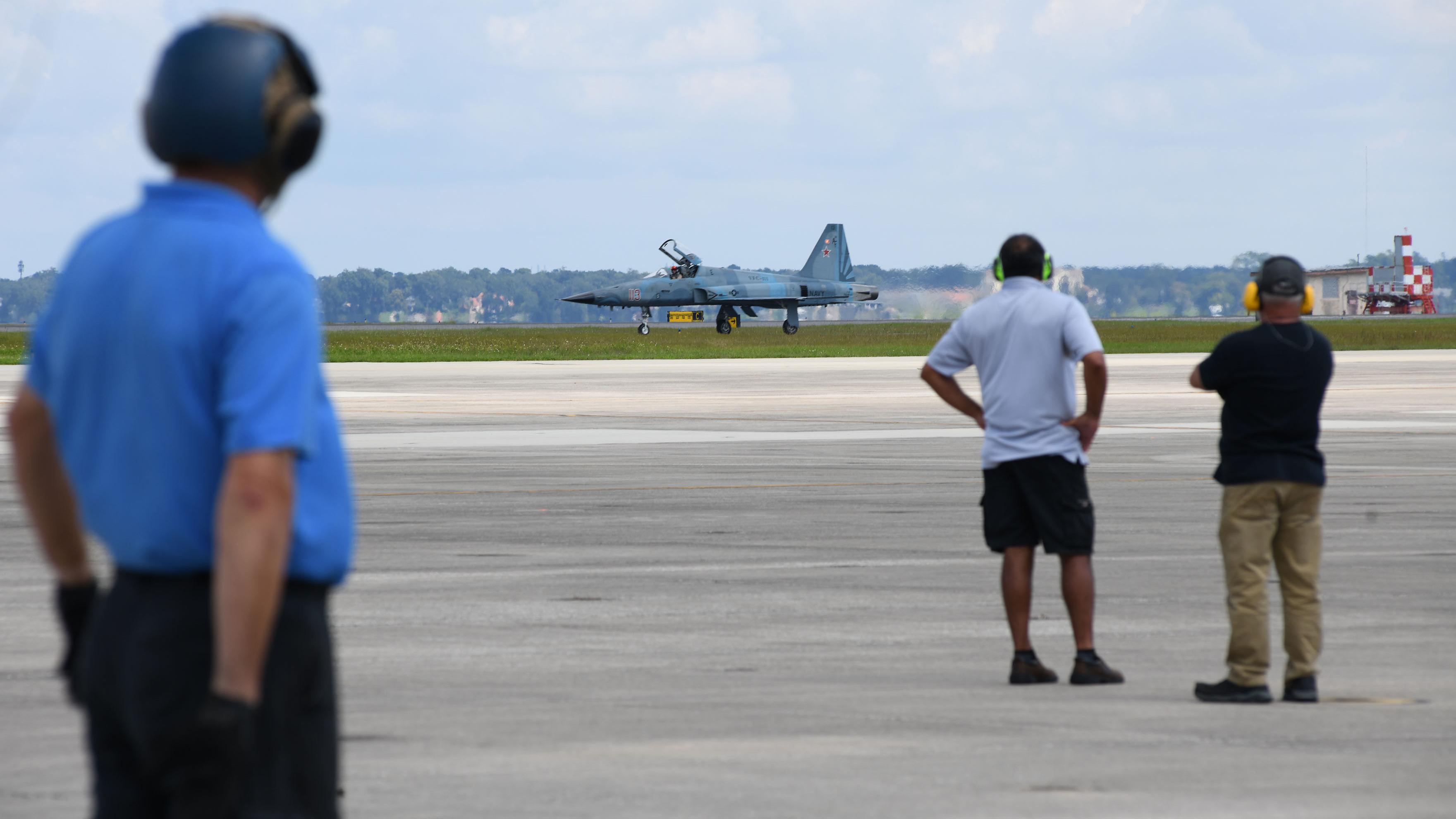 An F-5N Tiger II, with Fighter Squadron Composite 111 (VFC-111) Sun Downers based out of Naval Air Station Key West, Fla., taxis on the flight line as Fleet Readiness Center Southeast’s (FRCSE) ground crew wait to receive it as part of the new product lines initial induction. FRCSE has been named the depot source of repair for F-5 aircraft for the Navy and Marine Corps. (U.S. Navy photo released)