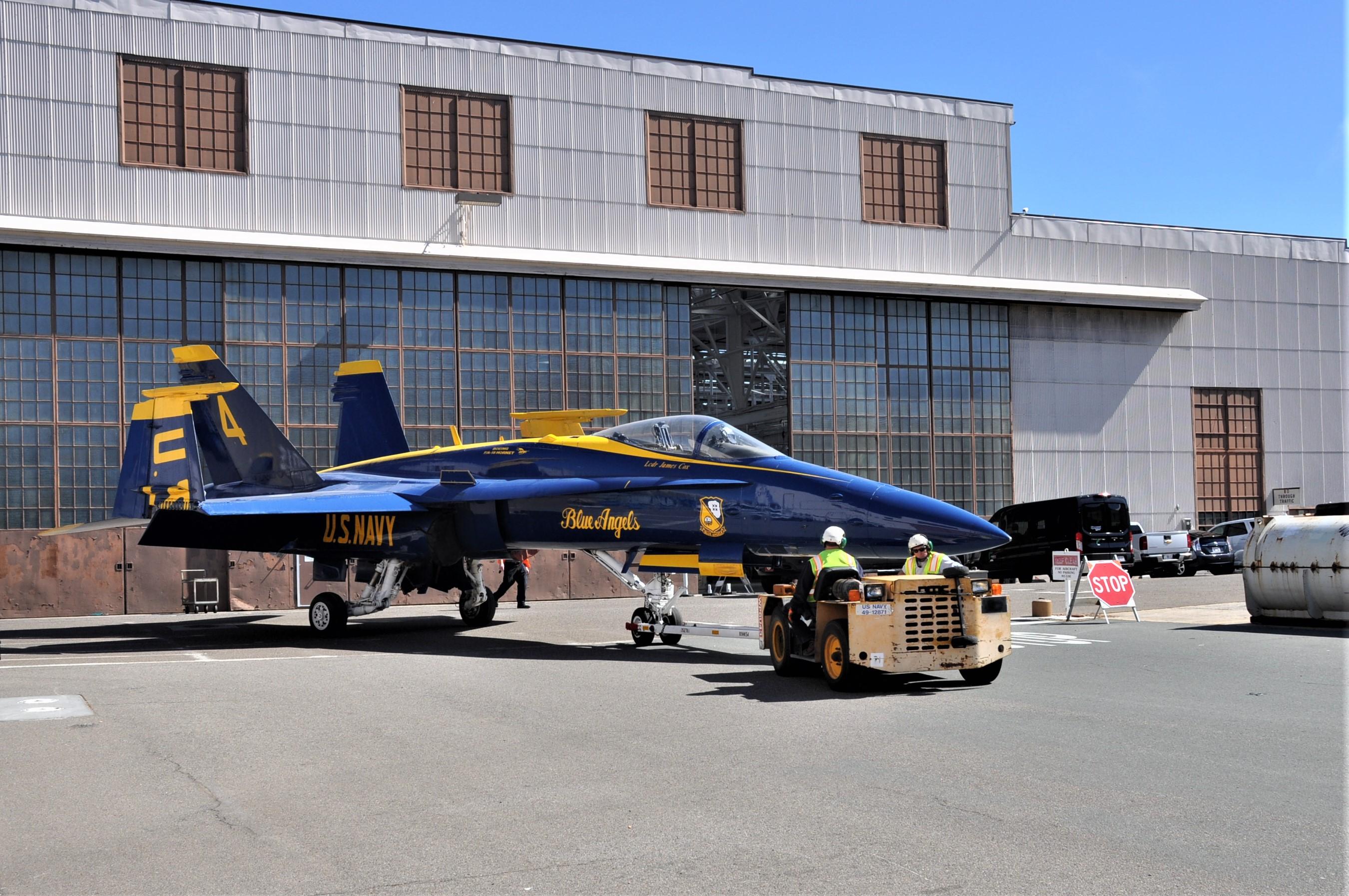 The legacy F/A-18 Hornet “C” fighter once assigned to the Navy’s Blue Angels flight squadron is towed from Building 94 February 24 to the command’s test line where its hydraulic fuel will be drained as part of the demilitarization process in preparation for its conversion to a pedestaled display in the courtyard of Commander, Naval Air Forces (CNAF). (U.S. Navy photo)

An F/A-18 Hornet fighter once part of the Navy’s Blue Angels demonstration flight squadron is heading to a new permanent home by early April.

The legacy “C” model Hornet will serve as a pedestaled display in the courtyard of Commander, Naval Air Forces (CNAF) on Naval Air Station North Island.

“CNAF requested a Blue Angel and with the legacy Blue Angel platform no longer being required, they were able to secure this aircraft for their request,” said Ehren Terbeek, Fleet Readiness Center Southwest (FRCSW) F/A-18 Legacy & E/F Program Manager.

For more than 30 years, the Blue Angels have flown legacy A-D Hornets. This year they transition to the newer E/F Super Hornet variants as they begin their 75th season highlighting the precise aerial maneuvers made possible by extensive naval training and teamwork.

The Hornet destined for CNAF was activated in 1988 and transferred to the Blue Angels in 2017 from Naval Aviation Warfighting Development Center (NAWDC) at Naval Air Station Fallon. NAWDC is the Navy’s hub for naval aviation training and tactics development.

In November 2020, it arrived to FRCSW for demilitarization from Naval Air Station Pensacola, Fla., where the Blue Angels are stationed.

“We have demilitarized aircraft numerous times to varying degrees. For a Hornet, it’s mostly engine removals as well as all explosive ordnance and fuel and hydraulic fluid,” Terbeek said.

The Hornet demilitarization procedure will take approximately one week and require about six artisans from various trades including ordnance and mechanics.

Terbeek added that FRCSW would also remove the aircraft’s wings during the installation in the CNAF courtyard, and reinstall them afterward.

Overall, the project will take about 300 hours to complete.

In January, FRCSW demilitarized another Blue Angels legacy Hornet for transportation to the Pearl Harbor Aviation Museum in Hawaii.