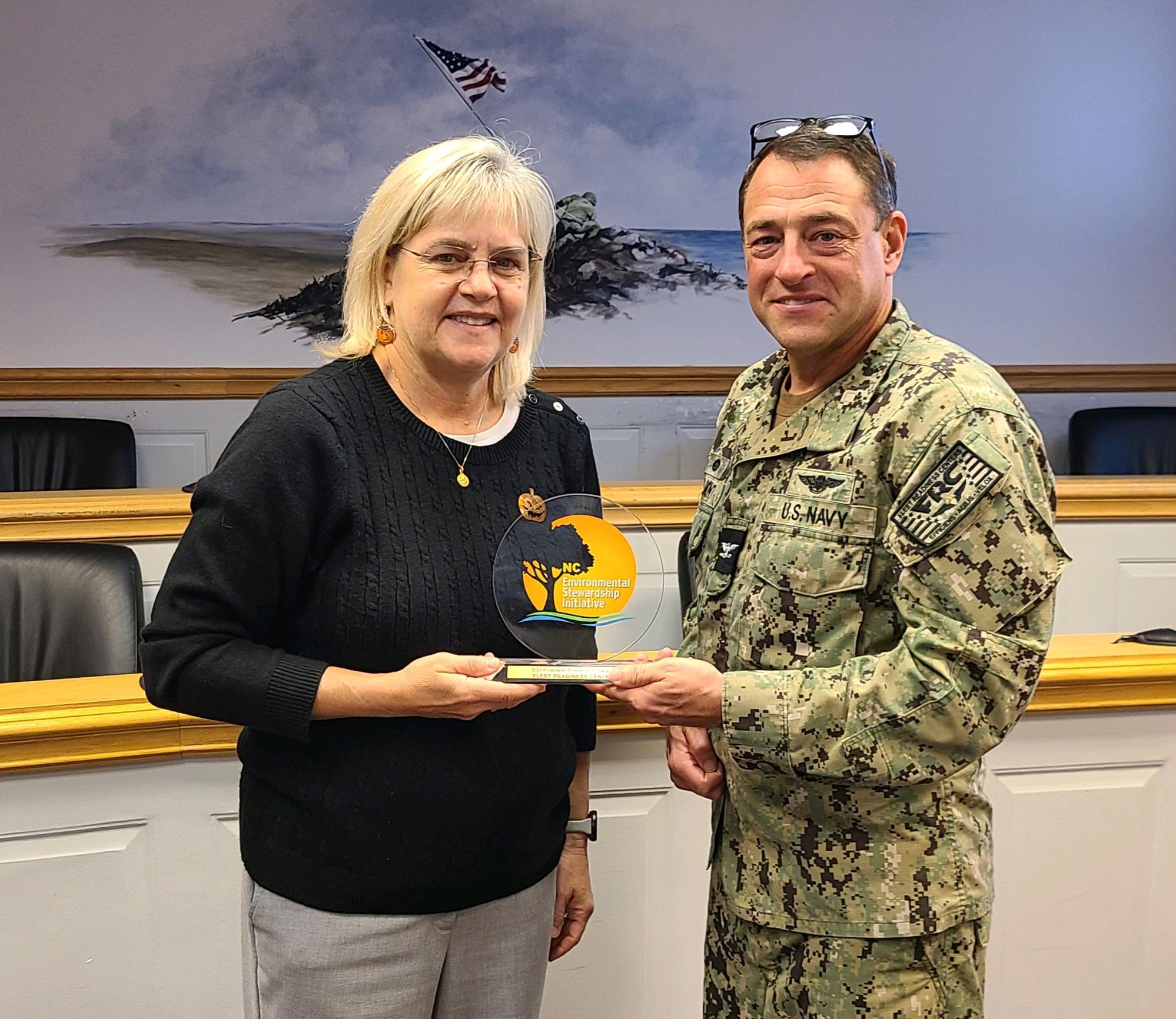 “It is an honor to receive this award,” said FRCE Commanding Officer Capt. James M. Belmont. “I feel it highlights the commitment of both the FRCE’s Environmental Division and our workforce as a whole. Everyone working at the depot is aware of our mission of supporting the warfighter as well as the need to be good stewards of the environment, both within the depot’s fence line and beyond. Our Environmental Division sets high goals for us and we strive to exceed these expectations.”

Stephen Azok, program coordinator for FRCE’s Environmental Management System, accepted the award at the ceremony on behalf of the command. He said FRCE made history as one of the initial recipients of the new award, which was issued for the first time during the conference.

“There is a lot of significance in this award,” said Azok. “We were competing with some really large organizations with outstanding environmental records. For FRCE to be considered, let alone to win this award, is a huge honor. Everyone working at the depot should be proud.”

FRCE earned the honor in recognition of an industrial wastewater reduction and water conservation initiative.

One of the sites identified as being a heavy contributor to industrial waste water generation was home to over 27 industrial activities ranging from the washing and cleaning of aircraft parts and components to furnace shop operations. Based on water meter data, this building was using an average of nearly 79,000 gallons of water per day.

The Environmental Division worked directly with artisans to identify the processes using significant amounts of water and develop and solutions.

“Our efforts centered on improving our ability to better manage water use in aviation repair processes so conservation of the resource is improved,” said FRCE Compliance and Quality Department Head Amy Morgan. “This involved modifying some of the equipment used, such as installing automatic shut off valves instead of continuous flow valves. We worked with the artisans on how to make better use of the equipment and manage the water while doing things like cleaning aircraft parts. This combination of efforts resulted in a significant reduction of water use and cost savings.”

FRCE saw a sustained 56% reduction in potable water usage in the building over the next year, cutting the average daily consumption from 79,000 to 44,240 gallons per day. FRCE also gained a utility credit of $540,000 as a direct result of these conservation efforts.

“A large part of these savings and reduction in usage came as a result of artisans on the floor,” said Lewis. “There were some infrastructure changes. We had to fix some sensors and valves. But all in all, the biggest part of the savings resulted from the artisans making a change in day-to-day operations. That played a significant role. We couldn’t do this without the engagement of the employees on the work floor and their participation with the programs.”

In addition, the Environmental Division identified storm drains as an opportunity for further savings. Redirection of the drains so they no longer discharged into industrial waste water treatment plant drains allowed for a further 20% reduction in water being sent to the facility.

Azok said the reductions and cost savings are impressive, but the most important benefits can’t be measured with numbers.

“This goes beyond cost savings,” said Azok. “We're actually improving water quality, reducing wastewater and conserving natural resources as well. For the business model, we're saving money and improving efficiency. For our employees and our local community, we are improving environmental quality and health.”

FRCE’s industrial wastewater reduction and water conservation initiative competed against other environmental initiatives submitted by organizations throughout North Carolina. To be eligible for the P2 Award, entrants had to be ESI members. Lewis said this made the competition intense as all ESI members are expected to go above and beyond minimum environmental requirements.

“We were happy our efforts were deemed worthy of the award, especially with such a large group of organizations doing really exceptional things with their environmental programs in the state,” said Lewis.

ESI is a voluntary program that recognizes and supports companies and facilities that display exemplary performance in reducing their environmental impact. FRCE has been a member for nearly 20 years.

According to Morgan, FRCE’s ESI membership and other environmental efforts are driven by a strong sense of community shared by depot personnel. FRCE has been a fixture in eastern North Carolina since 1943. As the largest maintenance, repair, overhaul and technical services provider in the state, the depot employs more than 4,000 people who call North Carolina home.

“We all live and work here,” said Morgan. “We all enjoy the natural resources of this area, and our resources are precious to us. Our staff consists of well educated, well trained professionals and they care about the environment. They care about our business, which is supporting the warfighter. At the same time, they want to do the right thing to protect our local area and our local community.”

Both Morgan and Azok referred to this sense of community as one of the factors that led to FRCE joining ESI when the program was in its infancy. Azok cited the depot’s proactive, aggressive environmental posture as instrumental to FRCE quickly achieving the highest level of membership, an elite designation for organizations that are committed to exemplary environmental performance beyond what is required by law.

“There are three levels within the ESI program: Partner, Rising Steward and Steward,” said Azok. “Steward is the highest level. We earned the title of Steward in 2004. Not only is the depot the only Department of Defense facility serving as an ESI member, we were one of the earliest organizations in the entire state to achieve the level of Steward.”

According to Azok, the process to achieve and maintain the level of Steward is rigorous.

“You have to prove that you have a very mature and comprehensive Environmental Management System,” said Azok. “You have to show environmental objectives and demonstrate that you're meeting those objectives. It's not an easy task to achieve this level or maintain it. It takes a lot of work.”

Lewis and Azok both named workforce participation as critical in sustaining the ESI Steward-level membership as well as other environmental programs and initiatives at the depot.

“The Environmental Division couldn’t do this on its own,” said Lewis. “We are not only maintaining our environmental programs, we are getting better each year and exceeding objectives. That requires engagement throughout our workforce. Luckily, we have a lot of boots on the ground. We have our program managers that are committed and on the ground working in the shops and departments. We have our artisans doing what they need to be doing.”

Lewis said this focus on environmental stewardship begins on an employee’s first day of work.

“It starts with new employee training,” said Lewis. “All new employees receive training covering our environmental program and what everyone’s responsibilities are. We try to make everything as easy as we possibly can in order to get that buy-in. If their responsibilities are unclear, or if the process of doing the right thing is difficult, people aren’t going to participate.”

Lewis and Azok both pointed to FRCE’s successful environmental record as proof that employees are engaged and participating.

The depot has maintained a robust and versatile Environmental Management System for more than 18 years. FRCE was the first Department of Defense (DoD) facility to register a comprehensive system incorporating its entire facility. The depot’s environmental program has sustained audits since November 2003, exceeding all requirements set by both the DoD and the Department of the Navy.

“In this day and age, everyone is aware of and thinking about environmental concerns,” said Azok. “At FRCE, we are no different. We have focused on our environmental program for many, many years and we are committed to being good stewards of the environment. This award shows that we're doing everything we can to protect the environment.”