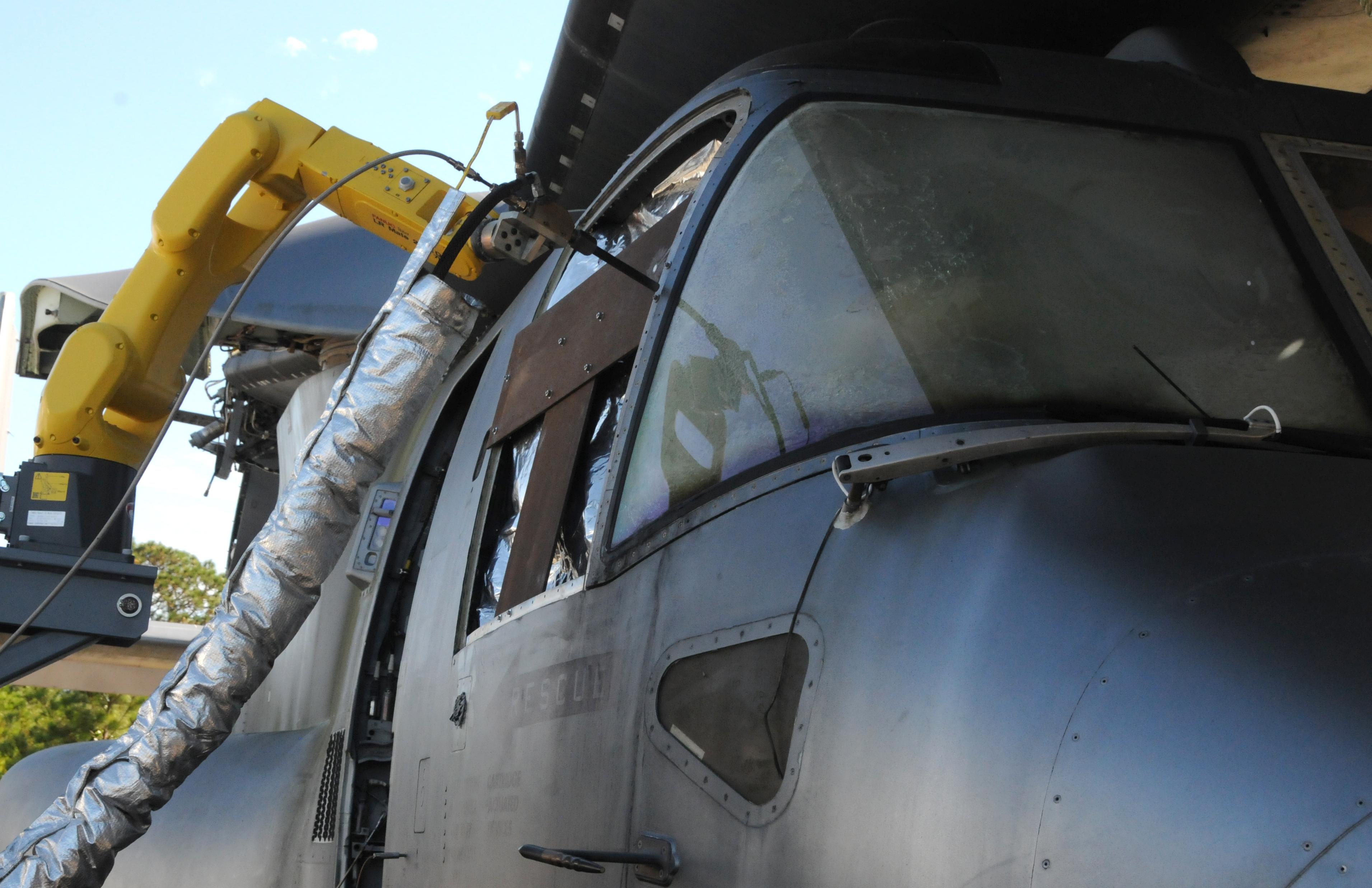 A mobile, autonomous cold spray metallization system sprays a corroded windowsill on a V-22 Osprey during the unit’s first-ever U.S. trials for structural repairs, held in late 2019 at Fleet Readiness Center East. The demonstrations took place as an initial evaluation of the program, which is a joint effort between Naval Air Systems Command and the Office of the Secretary of Defense’s Foreign Comparative Testing Program. NAVAIR materials engineers with the Advanced Technology Team at FRCE helped develop the program and bring it to the pilot testing phase. (Photo by Heather Wilburn, Fleet Readiness Center East Public Affairs)

Naval Air Systems Command materials engineers with the Advanced Technology Team at FRCE, along with representatives of VRC Metals Systems, completed the first U.S. field demonstration of an on-aircraft structural repair using a mobile, autonomous cold spray metallization system at FRCE in late 2019. Over the course of the two-day trials, the team completed an on-aircraft repair to the windowsill of a V-22 Osprey, and also conducted an off-aircraft repair to a surplus H-1 skid tube.

“The system operated better than predicted,” said Frederick Lancaster, lead for the Cold Spray Metallization Integrated Product Team at Naval Air Systems Command. “(It) worked as planned at five sites, in five different climates, at five different times of the year. Once it was programmed, the system worked without human intervention, on aircraft, and worked faster and more precisely than a human.”

The cold spray process bonds metal to metal in a relatively low-heat environment in order to deposit a coating onto a surface, or substrate. Solid metal powders are accelerated through a heated gas and directed toward a metallic substrate; the moving particles impact the surface and embed in the substrate, forming a strong bond.

The repairs completed during the pilot were consistent with those made using a stationary cold spray system, Lancaster said. Once approved, the new, mobile system will support the on-site repair of aircraft materials and increased mission readiness through rapid turnaround.

“With this program, we’re looking to bring structural repair capabilities closer to the aircraft, so you don’t have to take an aircraft apart to repair it,” said Jessica Templeton, a NAVAIR materials engineer at FRCE. “The end goal is to take the most cost-effective way of making these repairs, and make them available at the lowest level possible.”

The team has targeted parts like aircraft skins – the outer surface covering much of the wings and fuselage – windowsills, and areas on the tail as ideal candidates for repair without removal from the aircraft. Being able to repair parts to standard without major disassembly can lead to cost savings that are “pretty tremendous,” Templeton said. The autonomous aspect of the unit means that the work is done by a robotic arm which, after programming, requires minimal input from the workforce.

“Turnaround time is important, too. Once you start routing these parts through the shops, that adds a lot of lead time to your repairs,” Templeton continued. “With this technology, we would be able to repair existing parts to standards of airworthiness, rather than waiting for new parts.”

“It was realized early on in the deployment of cold spray technology that it would be more economical to perform repairs on-aircraft, in place, without any major disassembly,” Lancaster added. “(With this program) we are testing the capability of the system to perform precision work autonomously.”

In determining which components to target for initial testing, the Advanced Technology Team reached out to the depot’s many aircraft lines and asked for their “head-hurters,” Templeton said.

“Whenever we reached out to a platform, we asked them for their biggest item cost-wise or lead time-wise – the components they aren’t able to get that they need – and we tried to see if we could solve that issue,” she said. “When we reached out to V-22, they came back with a list. Not every repair is feasible, because not every component is easily accessible on the aircraft, or easily removable.”

For example, one item on the V-22 wish list was a fitting that is impossible to repair with the depot’s existing cold-spray system, without major disassembly of the aircraft.

“To remove it from the aircraft, spray it with cold spray, and put it back on is just not cost effective. If we could spray it in place, that would be the golden ticket,” Templeton said. “They wouldn’t have to take off all these different panels, and an entire wing piece, and disassemble these individually to allow us to cold spray in a booth – if we could spray it on the aircraft, or on a wing, that would be great.”

Challenges like these are the driving force behind development of the mobile, autonomous cold spray unit, but the system was also used earlier in 2019 to demonstrate repair of small-scale components during a Navy-wide cold spray event at Marine Corps Base Hawaii. The Navy has employed cold spray technology for years, but this mobile, autonomous system could make that existing technology available in new and different ways.

Most cold spray systems currently used by the Navy are located in booths, which creates size limitations, Templeton said. There are finite limits to the size of the components that can be treated in the booths, which means that parts often have to be removed from aircraft before spraying, or the components cannot be sprayed at all due to their size. Because this system is mobile, it can be fielded in locations that don’t have permanent cold-spray booths, lending itself to the possibility of on-aircraft repairs.

Another difference: The new system utilized a high-pressure cold spray, rather than the low-pressure systems currently in use at FRCE. Templeton said the high-pressure system is necessary for structural repairs, “to get the velocity, and get those particles moving at a fast enough pace to really impact and get that bond.”

While the pilot testing was not conducted on an operable aircraft, and the repairs made are not yet approved procedures, the trials do give program leadership an idea of the system’s potential future capabilities for on-aircraft repair, Templeton said.

“It’s definitely where we want to go with the cold spray, and where we see the technology needing to go,” Templeton said. “We’re trying to take this cold spray one step farther and go toward structural repairs.”

The demonstrations took place as an initial evaluation of the program, which is a joint effort between NAVAIR and the Office of the Secretary of Defense’s Foreign Comparative Testing Program. By using the FCT and technology already developed and qualified by the Australian Defence Science and Technology Organisation, NAVAIR was able to shepherd the program to an advanced Phase III transition status in less than three years for under $1 million. That represents a cost avoidance estimated at $6 million over eight years of development, had the project started with the traditional Small Business Innovation Research program, Lancaster said.

This testing represents the first in a series of demonstrations and assessments that will allow authorities to determine the airworthiness of these repairs, Templeton said. The next steps will include fatigue testing, to gauge the strength of the materials and the bond; finite element analysis, which predicts how a product reacts to real-world force and physical effects; and many other evaluations that must be conducted. This first trial was a way to determine whether the on-aircraft structural repairs were logistically possible using a cold-spray unit, she explained – there is more work to follow.

“In the near term, the next step is taking proven and qualified cold spray repair processes for dimensional or for applying a metallic corrosion preventative coating and transition them to on-aircraft application,” Lancaster said. “The future is with structural repair on aircraft, now that NAVAIR has a proven system that can perform precise, automated, high pressure cold spray repairs.”

If that process can be achieved, he added, the system can be used to perform more on-aircraft corrosion damage repairs, along with dimensional and wear issues. Getting to this point – moving the project from idea to implementation – required the support of a large, interdisciplinary team, Lancaster noted.

“A lot of people were instrumental in getting this technology to this point and the demonstration, and we could not have done it without a great NAVAIR team behind it all of the way,” he said, noting the efforts made by the Air Vehicle Engineering science and technology coordinator, H-60 Drive Systems, H-1 Drive Systems, V-22 Field Support Team and V-22 Structures, and the Materials Lab at FRCE. “My personal thanks goes out to all of them for a successful technology demonstration and transition.” 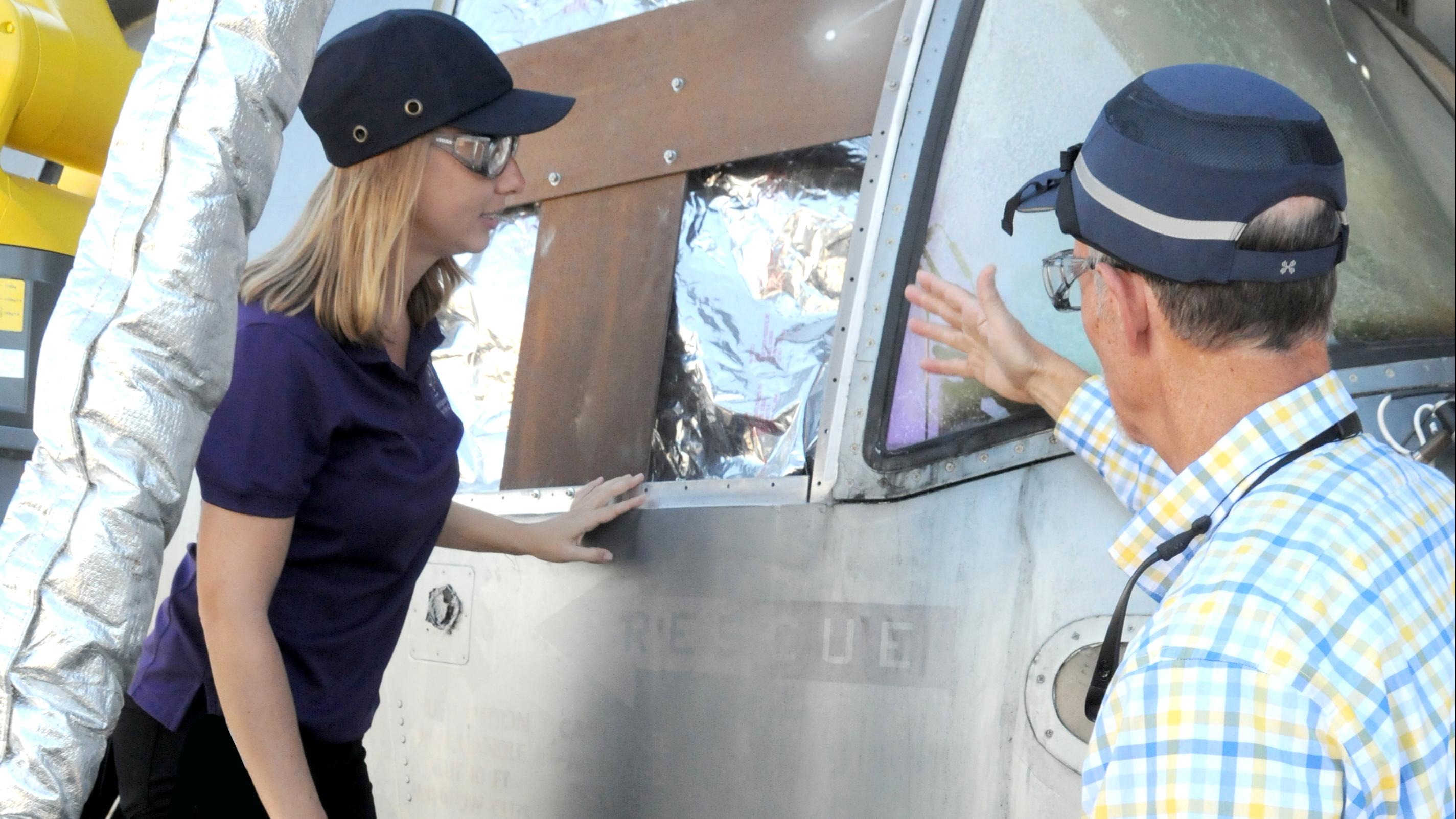