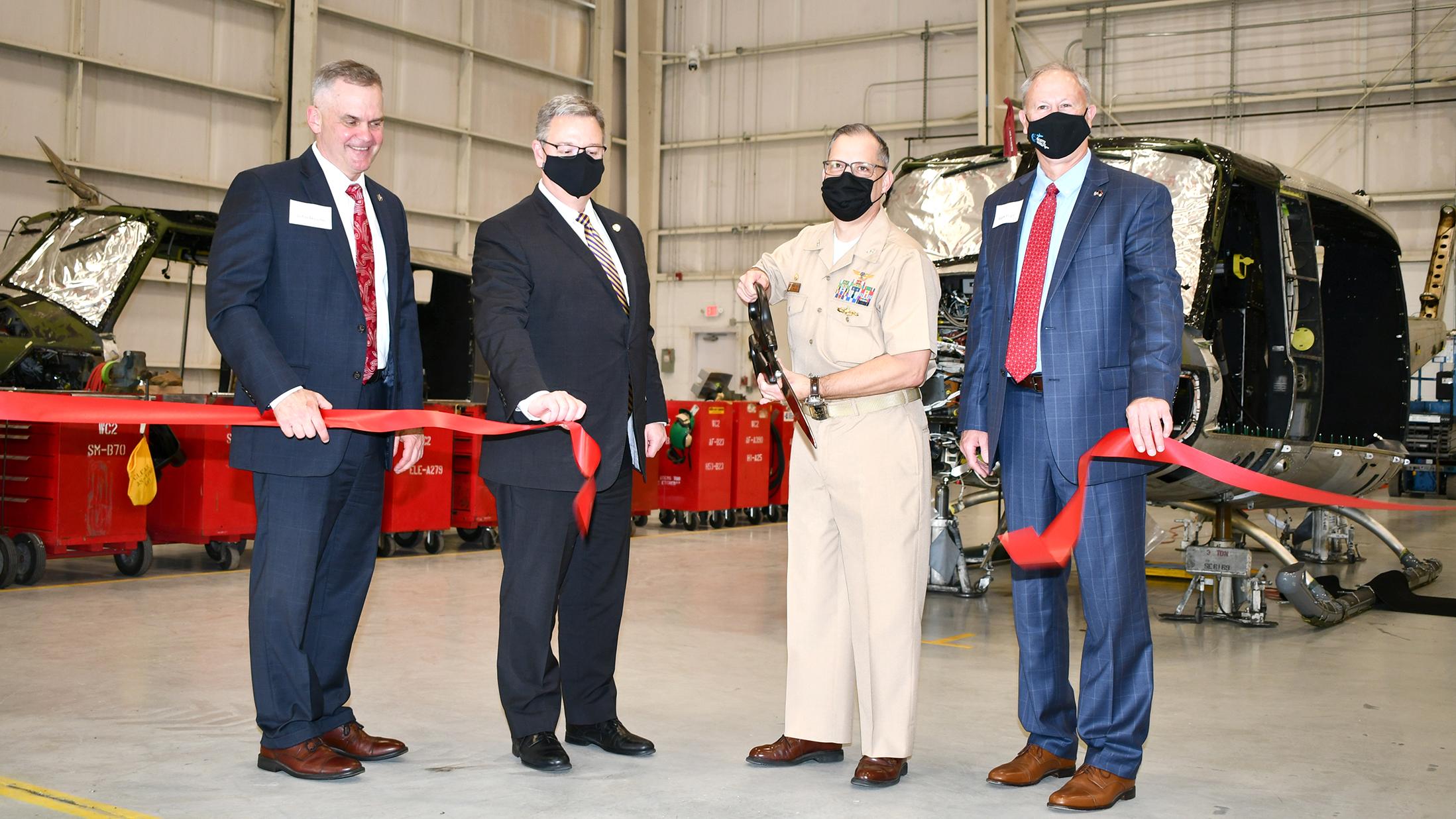 “The footprint at Global TransPark helps diversify and increase our presence in Eastern North Carolina, while giving us the space needed to successfully support our mission,” Nieto said. “This space will allow FRC East to continue to chart our way forward in providing unparalleled support to our Navy, Marine Corps and Air Force customers.”

FRCE has expansion projects under way with the depot’s footprint at MCAS Cherry Point; however, the military construction timeline can be long, and the existing need for increased hangar space was intensified by damage caused by Hurricane Florence and facilities modernization efforts onboard the air station, as older buildings are demolished to make was for new F-35 squadron facilities.

Currently, FRCE’s primary location at Cherry Point occupies 119 structures on 147 acres, covering a total of 2.1 million square feet, including 1.7 million square feet of production space. While FRCE awaits completion of approved military constructions projects including an F-35 vertical lift component and maintenance, repair and overhaul facility, and an F-35 vertical lift fan test facility, space requirements continue to grow. Leaders anticipate FRCE will take on an increased workload with the fielding of the H-53K King Stallion, along with additional efforts on the V-22 Osprey and F-35 Lightning II aircraft lines and in advanced composites and blade repair.

“We essentially had to ‘make do’ with the space, but making do only partially met our requirements,” Nieto explained. “We’re a major player in the aerospace industry in North Carolina, and the Global TransPark is a good fit.”

FRCE occupies the space at Global TransPark under a leasing agreement, which marks the first time in the organization’s history it has leased space for essential production operations. Global TransPark won the contract through an open competition of sites conducted in 2019.

Nieto shared the fact that FRCE enjoys unparalleled support in the local area, and said he’s happy to see FRCE become part of the community in Lenoir County.

“Our employees are scout leaders, little league coaches, volunteer firemen and part-time law enforcement officers in our communities,” he said. “We’re family, and we take care of one another. We’re proud to be members of your community.”

The expansion to Global TransPark also brings with it economic opportunities. FRCE contributes more than $1 billion to the regional economy and provides career opportunities in technical fields, with an average annual salary of $72,000.

North Carolina Sen. Jim Perry represents District 7 – which covers Lenoir County and part of Wayne County – in the state legislature. During remarks given at the opening, he said he’s happy to see Global TransPark supporting military operations and expressed hopes the program will expand.

“I really believe this is transformational for our entire region,” Perry said. “I can’t say enough good things about the direction of the TransPark, and the future of partnership with FRC East and what it means not just to them, not just to our military partners, but to everyone in the community.”

The new production space in Kinston benefits both the local area and the depot, Nieto said, as it allows FRCE to expand its role as a vital strategic asset for the Navy and Marine Corps team and the nation.

“We are very pleased to join the Global TransPark cohort,” he said. “We are grateful for the strong support of the state and the community. Together, we will continue to meet the demands of our nation, and support our Marines and Sailors who are forward-deployed around the world.” 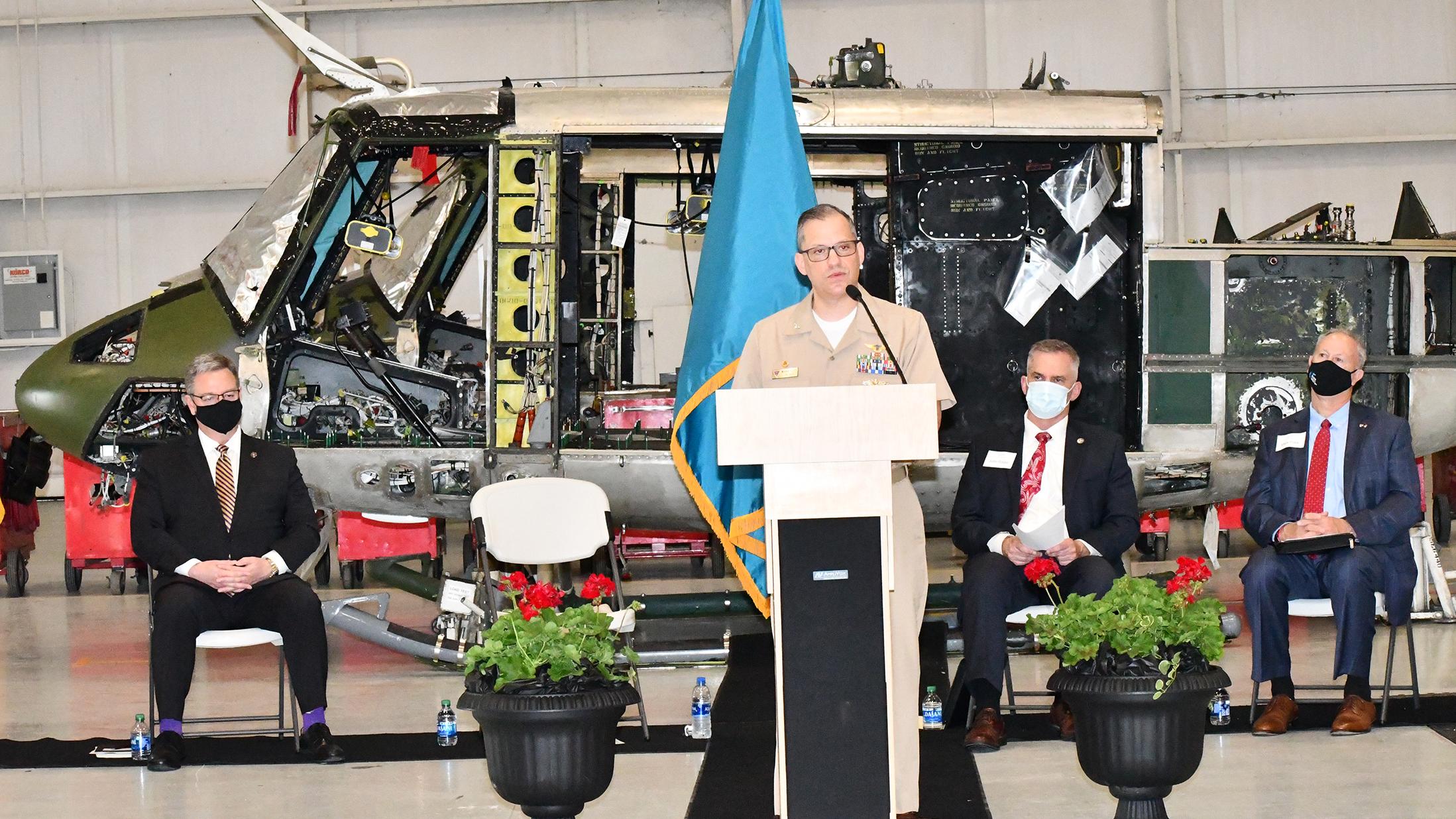 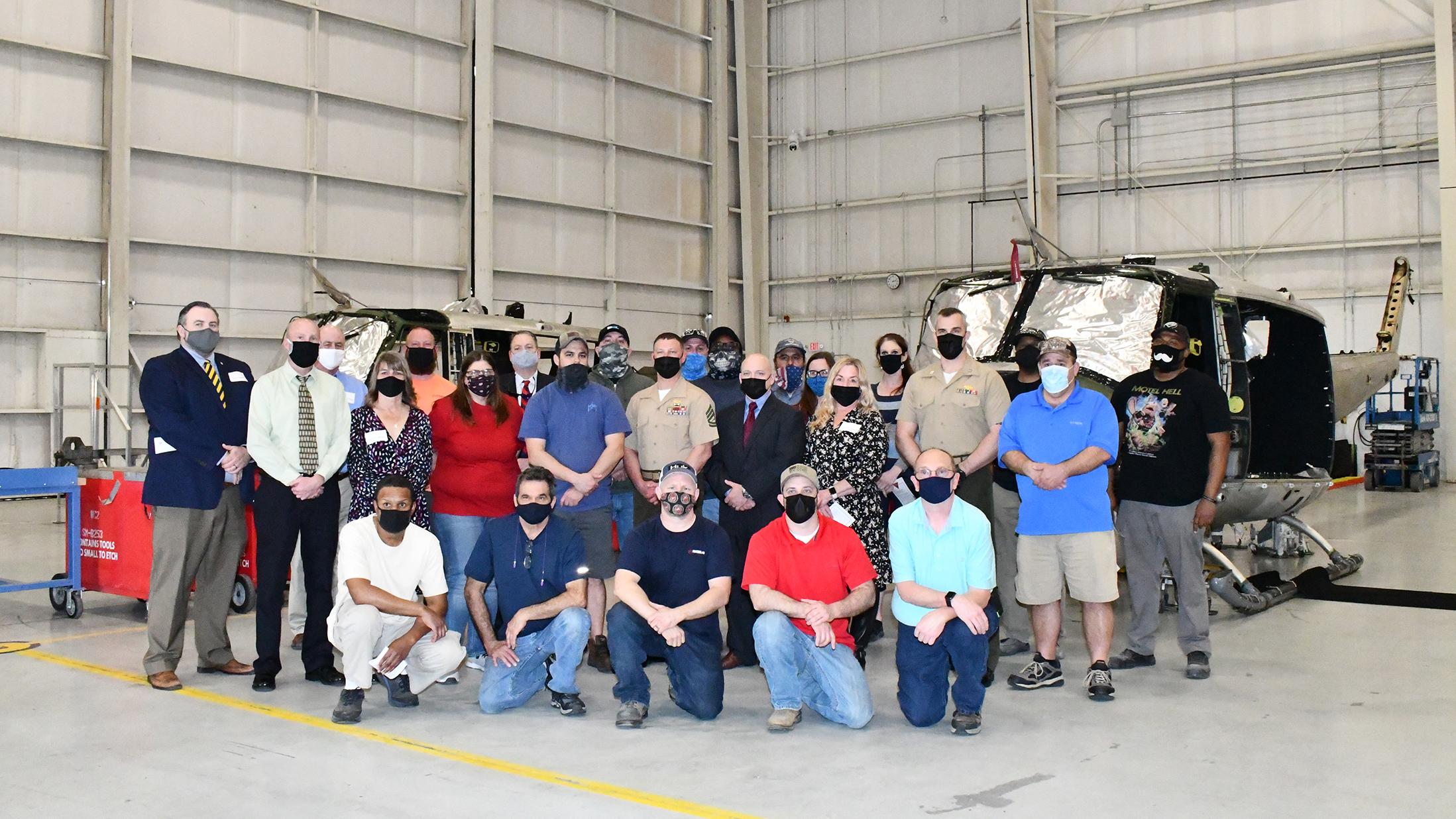 Aircraft maintenance professionals on Fleet Readiness Center East's H-1 helicopter line pose in front of an H-1 airframe with local officials and employees of the North Carolina Global TransPark during a ribbon cutting ceremony marking the depot's launch of operations at the Kinston facility. FRCE relocated its Air Force UH-1 “Huey” helicopter line to the Global TransPark, which will allow the depot to reclaim hangar space at its primary location onboard Marine Corps Air Station Cherry Point in support of the V-22 Osprey and H-53 heavy-lift helicopter programs