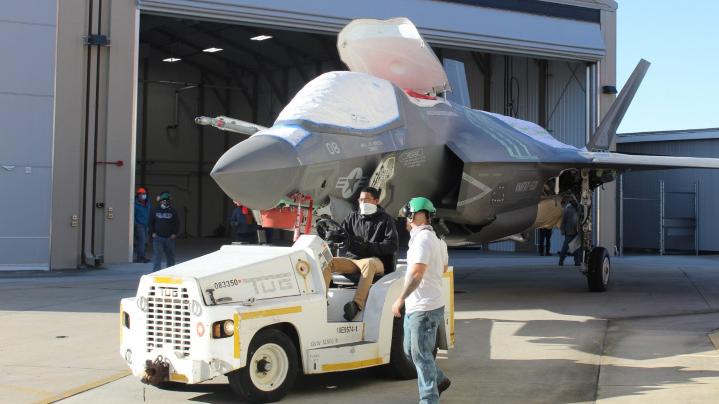 Fleet Readiness Center East marked a milestone with the induction of the first F-35B Lightning II aircraft to undergo laser peening modifications, and leaders anticipate the new workload will keep the facility engaged for the next several years.

During this time, experts will apply the high-tech procedure to select F-35B aircraft flown by the United States Marine Corps, strengthening the frames of the short takeoff-vertical landing (STOVL) variant of the F-35 Lightning II and helping the aircraft reach its full life limit.

The laser peening process takes place in a new, 16,000-square-foot facility that comprises two bays and a connected area housing the laser generator. The purpose-built, $6 million facility gives FRCE a capability for F-35 aircraft that will exist at only one other location in the world. The process, which has been utilized on the F-22 Raptor and in manufacturing aircraft components, uses high-energy laser pulses to strengthen materials without adding additional metal or weight, which results in increased aircraft lifespan and reduced maintenance costs.

“We’re excited to get this program under way at Fleet Readiness Center East and work toward providing the Marine Corps with F-35B aircraft capable of meeting their full life limit,” said FRCE Commanding Officer Capt. Mark E. Nieto. “This laser peening facility is a strategic asset that will allow us to provide support for the F-35B that’s not available anywhere else in the world.”

Ike Rettenmair, F-35 branch head at FRCE, said work on this first F-35B inducted for laser peening should conclude in early spring. Once that aircraft reaches completion, a second F-35B will follow closely behind, with the workload scheduled to ramp up to a full load shortly thereafter.  While not every F-35B requires the procedure, many do – which will keep the laser peening operation busy for quite some time.

“By late spring, we should get to the point where we are running at full capacity,” explained Matt Crisp, FRCE site lead for the F-35 Joint Program Office. “And that will take us through many years of laser peening modifications to the F-35B. We’ll have the facility full with that workload.”

When an F-35B rolls in for laser peening modifications, FRCE’s aircraft maintenance professionals first work to disassemble the aircraft and remove the appropriate parts to allow access to the areas of the frame that need strengthening. Contractors with the company that developed and conducts the laser peening process take it from there.

“They elevate the airplane into the air, and then the robots take over once the contractors program the visit, which is what they call the procedure where they actually shoot the lasers at the airplane,” Rettenmair explained.

The contractor has installed and activated specially engineered equipment in the laser peening facility, and will use that equipment to treat locations on the aircraft’s bulkhead and airframe, said Brent Dane, director of laser technology for Curtiss-Wright Surface Technologies, which developed the process. Brand new bulkheads built into new F-35B aircraft receive the same treatment at the company’s laser peening facility in California, so new F-35 fighters benefit from the same increase in performance and lifetime extension right off the assembly line, he added.

During laser peening, a high-energy laser beam is fired at the metal, which creates an area of plasma on the metal’s surface. The impact creates a shock wave, which travels through the metal, and compressive residual stresses remain. This compression helps improve the metal’s damage tolerance, fatigue life and strength, leading to a more durable product.

“It strengthens the base material without us having to go in and add additional material – which would increase the weight of the airplane, which is not a good option – or remove and replace these parts, which also isn’t really an option when the piece is integral to the structure of the aircraft,” Crisp said. “This procedure is a good solution to strengthen what’s already there.”

The end result is aircraft that have been reinforced without adding additional weight, which would reduce the fighter’s capabilities by limiting its fuel or weapons carrying capacity. Because of this, the laser peening procedure is well-suited to the treatment of safety critical components in military applications, Dane said. It provides increased reliability and life extension not available from any other surface treatment on the market today.

Once the contractor completes the laser peening procedure, the aircraft goes back to FRCE’s F-35 line for reassembly, just like all the other aircraft that come through the facility, Rettenmair explained. FRCE will put the jets back together, perform all the flight test functions and get them back out to the fleet.

Rettenmair said he expects some flexibility in the anticipated turnaround time for the laser peening procedure during this first run.

“It’s kind of a learning experience for everyone,” he noted.

Any first-time modification will have a bit of a buffer built into the timeline, Crisp added. The goal is to first perfect the process and then start improving its efficiency.

“When it’s the first time you’re conducting a modification – the first time that anybody is ever doing it – we’re going to find some things we need to address or change, update or improve,” he said. “Then, as time goes on, we look for that continuous improvement to drive that timeline back as far as we can, expedite the process and make it happen even faster.”

Optimizing the laser peening timeline will be important as FRCE continues to conduct the process over the next few years, Crisp added, in order to provide the strengthening procedure to the aircraft that need it when they need it, in order to prevent delays or degradation.

“From a Navy-Marine Corps perspective, this is really big deal. It’s going to help get the Marine Corps’ aircraft back to where they wanted it to be, and it's going to give the airplanes the full life expected of them,” he explained. “The timeline is critical, but right now we have a path to green, if you will. We can get all these aircraft healthy by the time they need to be healthy.”

In addition to boosting readiness within the F-35B fleet, leaders within the F-35 program hope the procedure can also benefit other areas of naval aviation. Laser peening has expanded over more than 20 years from use on jet engine components for commercial aviation to other components to the F-22 Raptor and, now, the F-35 Lightning II. The process itself has undergone notable advancements in engineering design and modeling, beam delivery and process automation during this same period, Dane said.

“Our engineering development and production teams are proud to deliver the benefits of this unique technology to a wide range of important applications, particularly those that contribute to our military defense,” Dane added. “We look forward to ever-growing applications of this technology for critical military assets to strengthen our nation’s defense and help protect the safety of the warfighter.”

Locally, Rettenmair and Crisp encourage the workforce within the F-35 program, and at other aircraft and component lines, to search for potential uses for laser peening.

“A lot of folks don’t know this technology even exists, so having it right in our own back yard could be the catalyst they need to consider other uses for laser peening,” Rettenmair said. “It’s absolutely a great asset, and I hope it can broaden our horizons on the type of technology that’s out there.”

“I think we have to challenge ourselves,” he said. “FRCE has been able to benefit from having the Joint Program Office contract this technology to come in and help get the facility set up – there’s been a lot of work, obviously, to get to this point.

“Now that we have this capability here at FRCE, I’m hopeful there is a potential that other activities here can look at this capability in a way that considers whether it could be right for their program, maybe to extend the life of another asset that’s already in the Navy-Marine Corps inventory. I hope we can take this experience we have in front of us and not just move on to something else at the end, but learn from the experience, create engagement and apply it in other locations that need a solution.”

In addition to offering development opportunities for other programs, the laser peening workload also represents the beginning of an expansion in the F-35 program at FRCE, Crisp noted.

“We have growth requirements within the next few years to go beyond what facilities and capabilities we have now,” he said. “For the stability of the program in the area and the economic outlook, it looks really good.”

FRCE is the lead site for depot-level maintenance on the F-35B Lightning II and has conducted modifications and repair on the Marine Corps’ short takeoff-vertical landing variant of the aircraft since 2013. The facility has also worked with the F-35A (conventional takeoff and landing) and F-35C (carrier) variants.