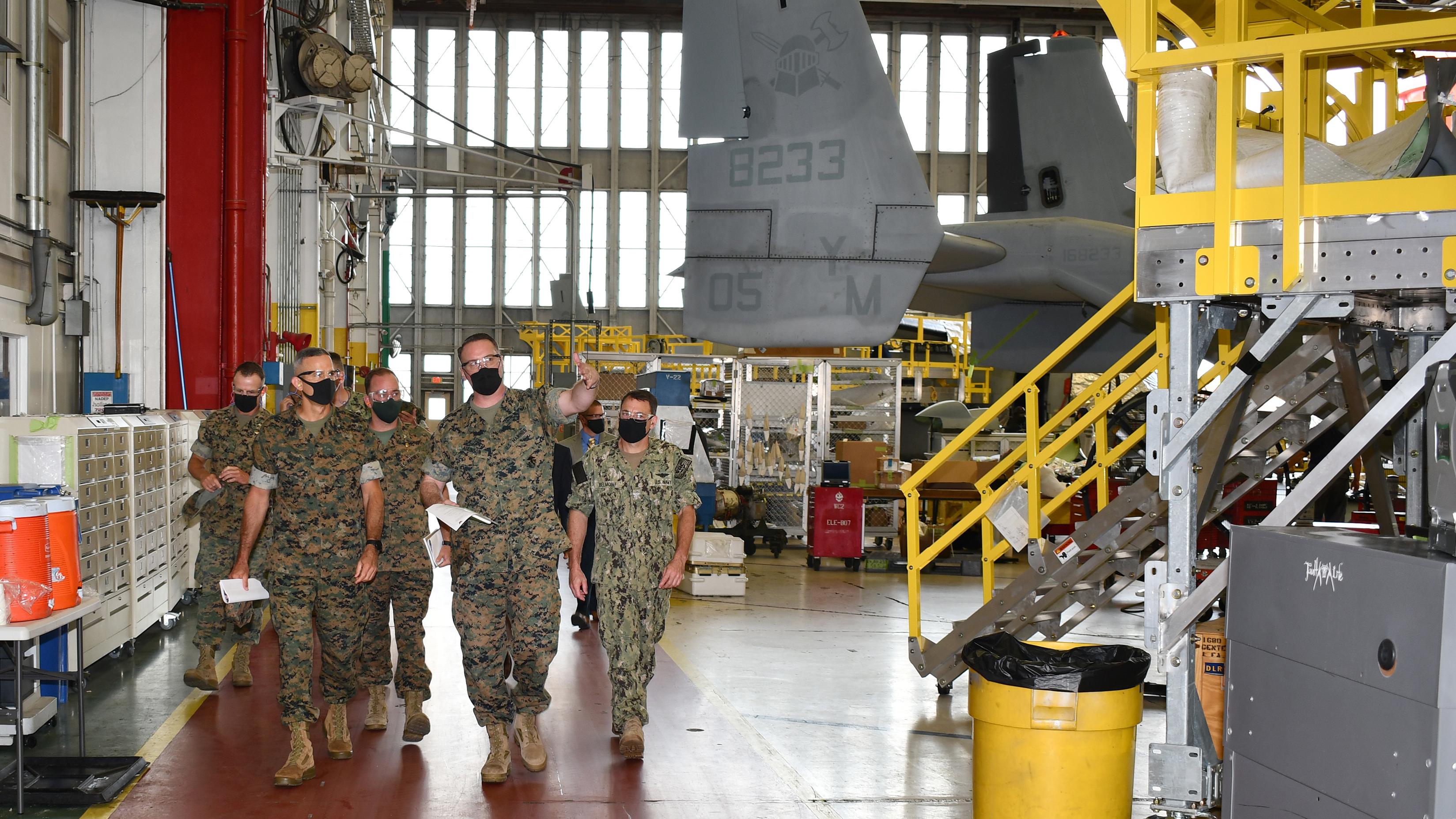 “We were proud to show General Niebel how important FRC East is as a warfighting capability for the Marine Corps, and what our tremendous workforce does to support fleet readiness,” said FRCE Commanding Officer Col. Thomas A. Atkinson. “We were able to demonstrate some of our creative approaches to problem solving, and highlight some of the state-of-the-art capabilities FRC East is scheduled to bring online in the near future.”

Jarman showed the group how FRCE can use 3D printing to design, prototype and develop a creative solution to a problem aircraft maintainers might experience out in the fleet. One example, a template for placement of click studs on the rotor system of V-22 aircraft, helps ensure maintainers in the field can place the studs correctly. Proper placement is essential, as improper placement could damage the aircraft, Jarman noted.

As the depot moves into the future, the goal is to support the fleet by providing a source for reach back that can send a creative solution to a forward-deployed unit, which can then use 3D printing to manufacture that solution on-site, said Military MRO Production Director Lt. Col. Jason Raper.

“We are striving to be on the cutting edge of technology, and to serve as the future home of innovation that supports the fleet around the world with the click of a button,” Raper said. “We are the future for innovative solutions to support Navy and Marine Corps sustainment in the future.”

The tour continued its focus on the future with stops at the F-35 modification line, the F-35 laser shock peening facility, and the future sites of facilities designed to test the aircraft’s vertical lift fan – a key feature of the short takeoff-vertical landing feature of the F-35B variant flown by Marine Corps aviators – and support additional modification workload. These additional resources will be required to meet warfighter requirements as the F-35 workload expands with the aircraft’s presence in the fleet, said Fixed Wind Division Director Donald Jeter.

The laser shock peening facility uses laser technology to strengthen the airframe of select F-35B aircraft, extending the lifespan of those aircraft. Scheduled for completion in early 2023, the vertical lift fan test facility will be the only depot-level maintenance test facility in the world that services the component. Both represent strategic assets to the fleet and mission readiness, leaders noted. 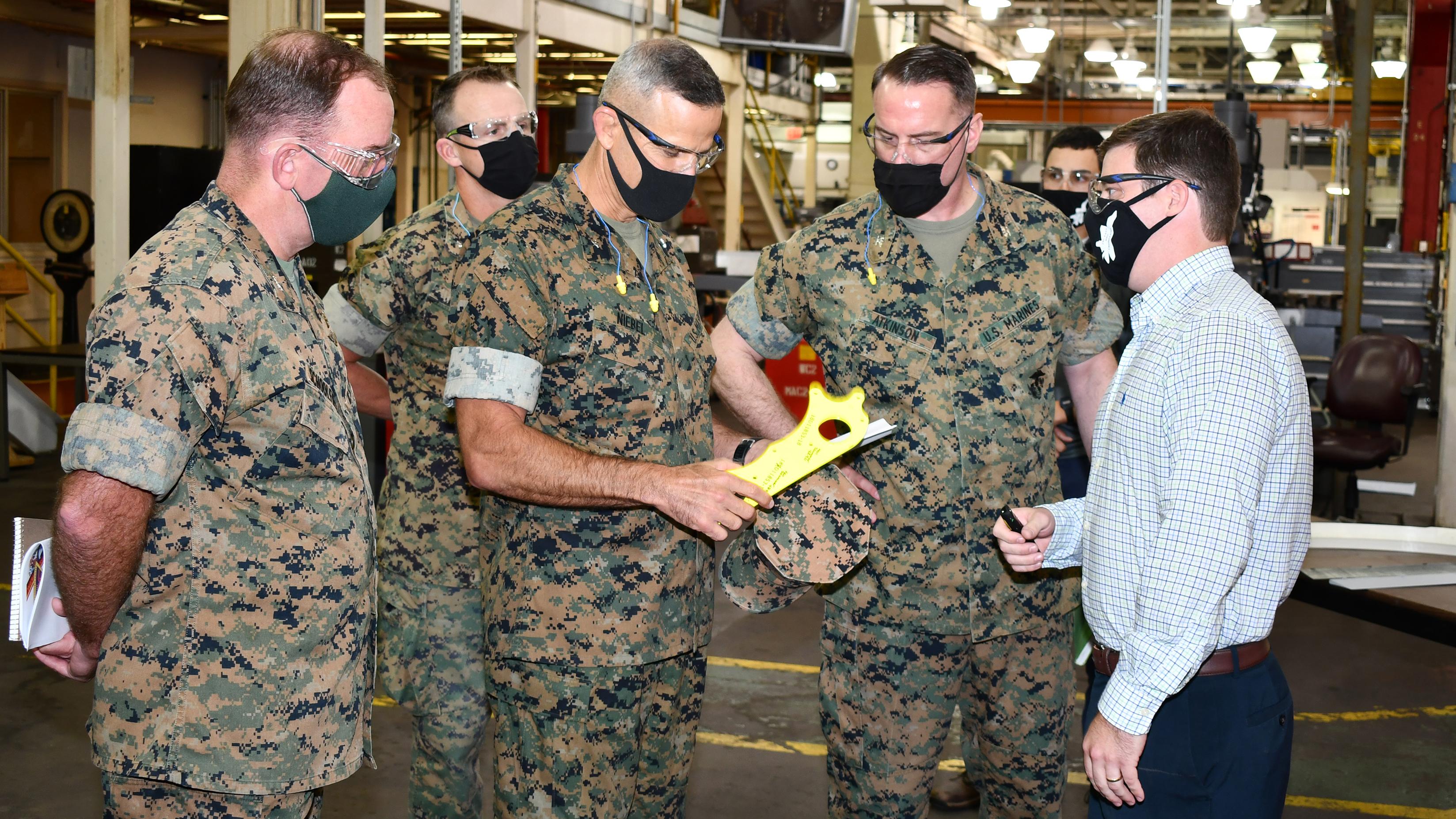 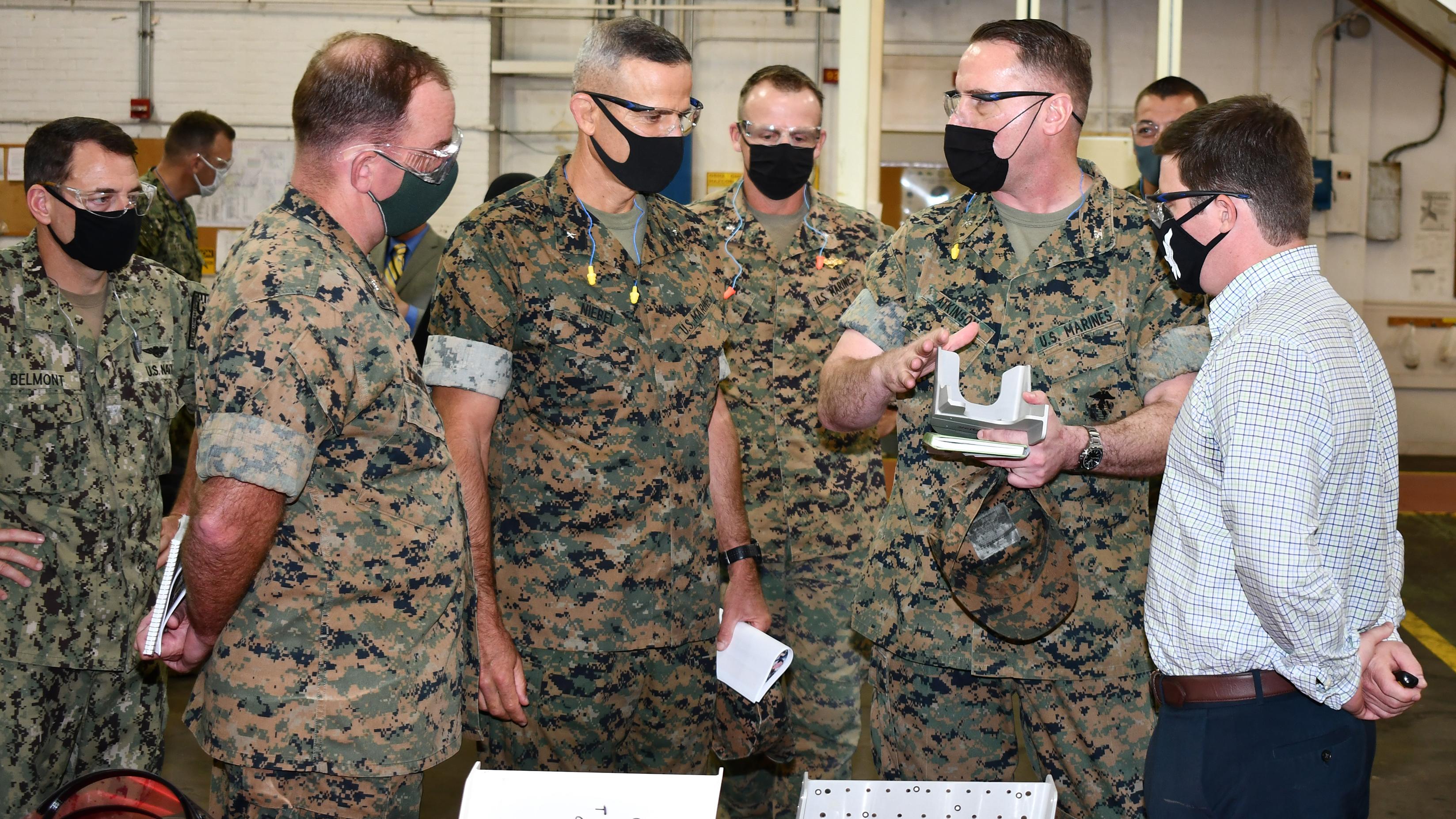 FRCE Commanding Officer Col. Thomas A. Atkinson, second from right, discusses a prototype of a 522 fitting, a component of the H-53 heavy-lift helicopter, with Brig. Gen. Andrew M. Niebel, commanding general of MCIEAST-MCB Camp Lejeune, during a Sept. 24 tour of the depot. When supply constraints made the component impossible to attain within the needed timeframe, engineers and artisans at Fleet Readiness Center East worked together to develop a solution for manufacturing the part. 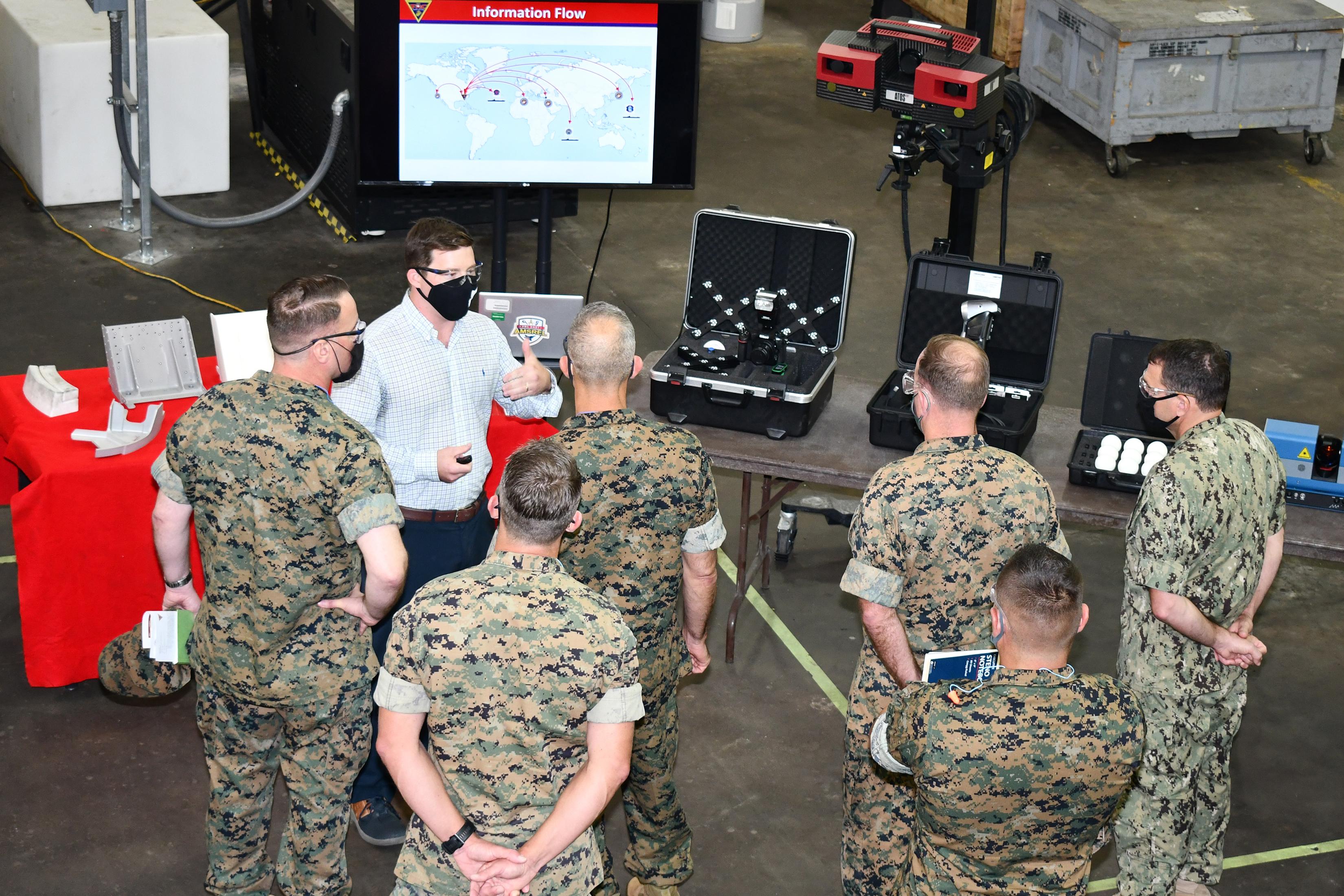 Jonathan Jarman, second from left, head of the Digital Data Center Branch within the AMSREL Division of the MRO Engineering Department at FRCE, briefs a group including FRCE Commanding Officer Col. Thomas A. Atkinson and Brig. Gen. Andrew M. Niebel, commanding general of MCIEAST-MCB Camp Lejeune, during a Sept. 24 tour. 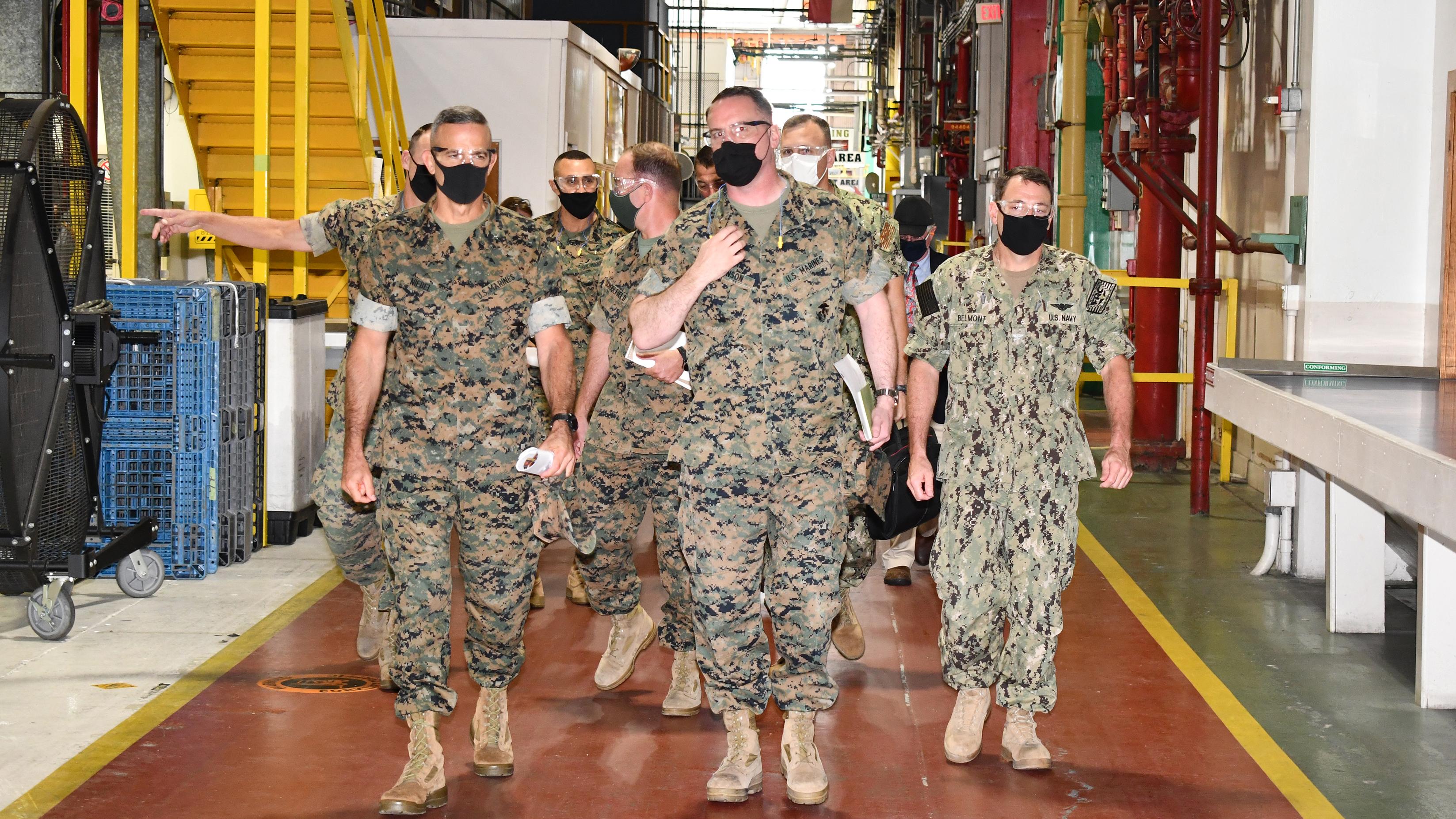