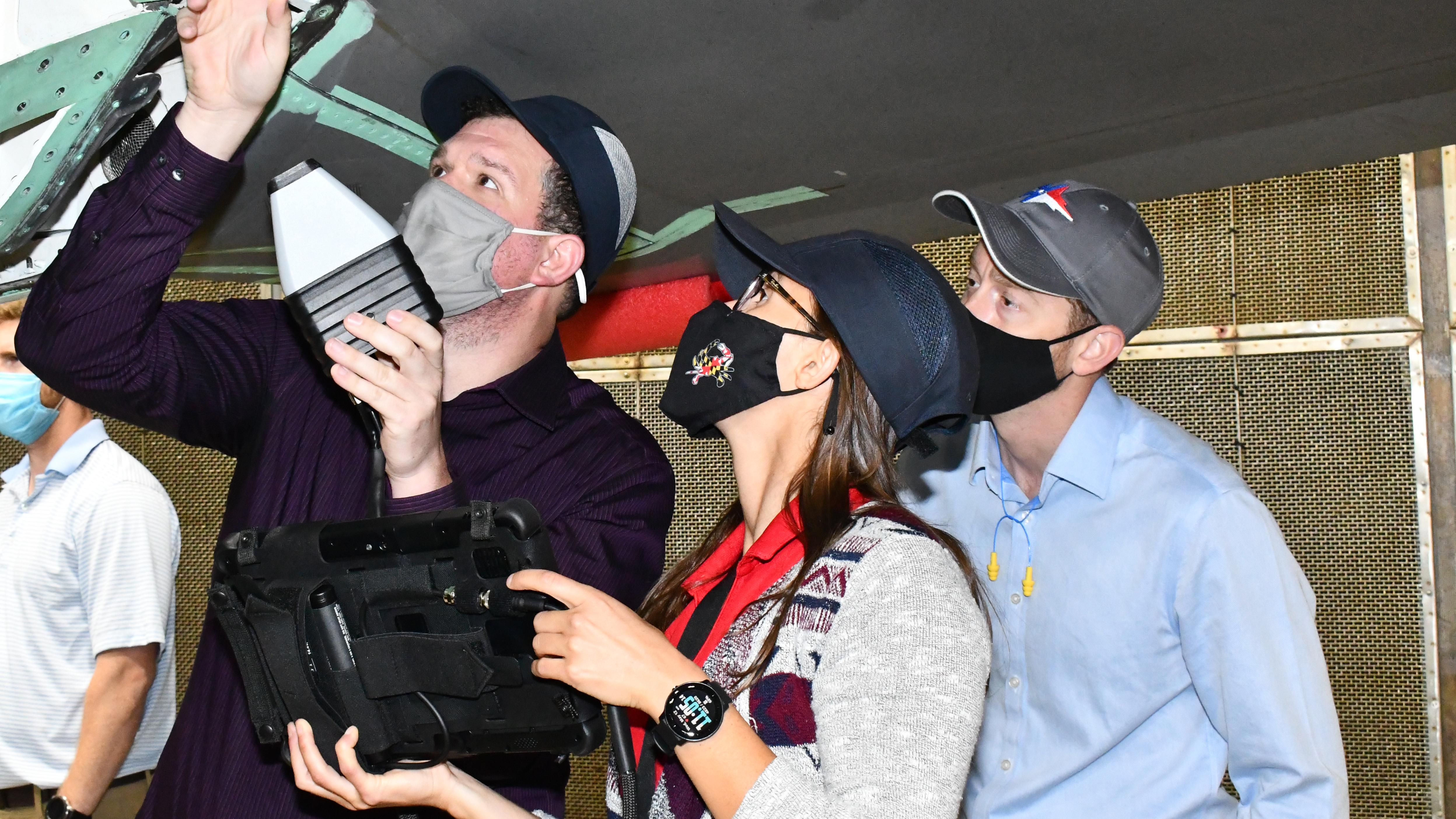 When it comes to military aircraft maintenance, corrosion is a fact of life. The Navy and Marine Corps aircraft maintained at Fleet Readiness Center East (FRCE) operate in some of the planet’s most extreme conditions and demanding scenarios, resulting in the need for costly and time-consuming corrosion inspection and repair processes.

Now, a team at FRCE is examining new possibilities for quickly and accurately detecting corrosion and preventing its spread. The F-35 Lightning II program at FRCE recently hosted a demonstration of a tool that can help identify corrosion through many aircraft coatings: the Grey Gecko Real-Time Inspection Tool, or GRIT system.

“Corrosion is a recurring theme across all forms of aviation, resulting in huge cost and fleet availability impacts,” said Matt Crisp, FRCE site lead for the F-35 Joint Program Office, who organized the event. “Current detection methods for most aircraft involve visual inspection using traditional tools. These inspections are time consuming, sometimes require additional efforts like removing paint, and can be highly subjective based on inspector techniques, experience and attention to detail.”

“The idea is to produce clear, easily understandable pictures of damaged areas that can be immediately shared with leadership, maintainers, investigators and customers,” said Ron Stearns, business development director at Grey Gecko. “It’s designed to be used plane-side by traditional maintenance personnel, and to complement phased non-destructive inspection intervals. One of the things that we're very proud of is that it can act as a vector to enhance or better target other methods that are prescribed in the maintenance manuals.”

The tool uses a mid-wave infrared camera to visually penetrate the aircraft coatings and record images of the surface below. Grey Gecko estimates use of the GRIT for non-destructive inspection can reduce aircraft downtime caused by corrosion by up to 25% and reduce the inspection manpower requirement by more than 50% in some applications.

As part of the GRIT demonstration, a multidisciplinary group of engineers from aircraft lines across the depot and members of the Naval Air Systems Command Advanced Technology and Innovation (ATI) Team at FRCE had the opportunity to discuss the tool with its designers at Grey Gecko, and get hands-on experience by testing the tool on various aircraft panels and FRCE’s F-35 maintenance trainer airframe.

Crisp said the demonstration was scheduled to familiarize the group with the product’s manufacturer, evaluate the equipment and its capabilities and limitations, and explore the potential for the tool’s use in both depot and fleet environments.

“Part of this effort is to go back and sharpen our pencils on how we could integrate this new functionality into our existing corrosion and inspection programs to fully utilize its capability and get the most efficiency out of its use,” Crisp said. “Each team had the opportunity to ask questions, get hands on testing, and even test some of their own peculiar parts. Holistically, the equipment was very interesting and seemed to work well. The challenge now is to figure out who can get the most benefit out of this, and how to go about making this a reality.”

This equipment demonstration marked the first hosted by the F-35 program, Crisp said, adding that the F-35 depot team at Cherry Point plans to work more with the ATI Team to explore new technologies that have potential benefit for both F-35 and other fleet support teams and maintenance, repair and overhaul operations.

“Many on-site demos give you an opportunity to get hands-on experience with a technology, compare it to your use case, as well as look for additional opportunities to test it out on,” Clemmons explained. “The vendor was able to demo their capability for the stakeholders to detect corrosion under paint on a few panels that were pre-corroded and painted over to various thicknesses.

“Understanding that this was the main capability of the technology, we wanted to take the opportunity to test it out on various primers, top coats, and thicknesses for multiple platforms to better evaluate the system and look for opportunities for refinement and expansion with the utilization of the tool. That’s the beauty of developing, maturing, advancing, and refining a technology,” Clemmons continued. “My team is currently in the process of gathering feedback from all the stakeholders in attendance and providing that feedback to the company for potential further development and expansion into other coatings.”

Robert “Yogi” Kestler, lead engineer with the ATI Team, said he has been working with Grey Gecko to provide technical support and guidance for development of the GRIT system in order to address sustainment requirements and needs at FRCE.

“The demonstration was a success in my opinion, because it allowed us to see how far Grey Gecko had advanced their GRIT system,” Kestler noted. “There are applications where a device like the GRIT may be useful to the fleet. Corrosion is the top problem we see for sustaining our weapon systems; we spend billions of dollars on corrosion issues each year, and we are looking for tools and technologies to reduce its impact.”

While organized by the F-35 program, the GRIT demonstration fell right in line with the ATI Team’s mission of developing solutions for the multiple aircraft supported by FRCE, Clemmons said.

“We want to focus on technology across the entire technology readiness level spectrum; therefore, we can identify quick wins to implement within a maintenance, repair and overhaul environment, while also being forward-leaning into the next generation of technology for fifth-generation and beyond aircraft.”

Hosting product and technology demonstrations presents a win-win situation for both the depot and industry partners, Kestler added.

“Demonstrations benefit both the fleet readiness center and the companies,” he explained. “They allow us to evaluate the potential of the technology and we have an opportunity to provide input to companies for potential improvements and design changes for prospective applications.”

Crisp said having the F-35 maintenance trainer airframe, which arrived at FRCE in March, helped make the GRIT demo a possibility.

“We as the F-35 depot team at Cherry Point hope to keep hosting and engaging in similar events to evaluate new technology and how we can integrate it into the fleet and depot environments to reduce time to repair, program sustainment costs, and increase the availability of aircraft in the fleet,” he said. “This is our first demo event using the newly acquired F-35 maintenance/test trainer airframe, but we have several others already scheduled and others in discussion for planning in the future. We are excited to have this asset at our disposal and what we can do with it to pour value back into the sustainment of the F-35 program.” 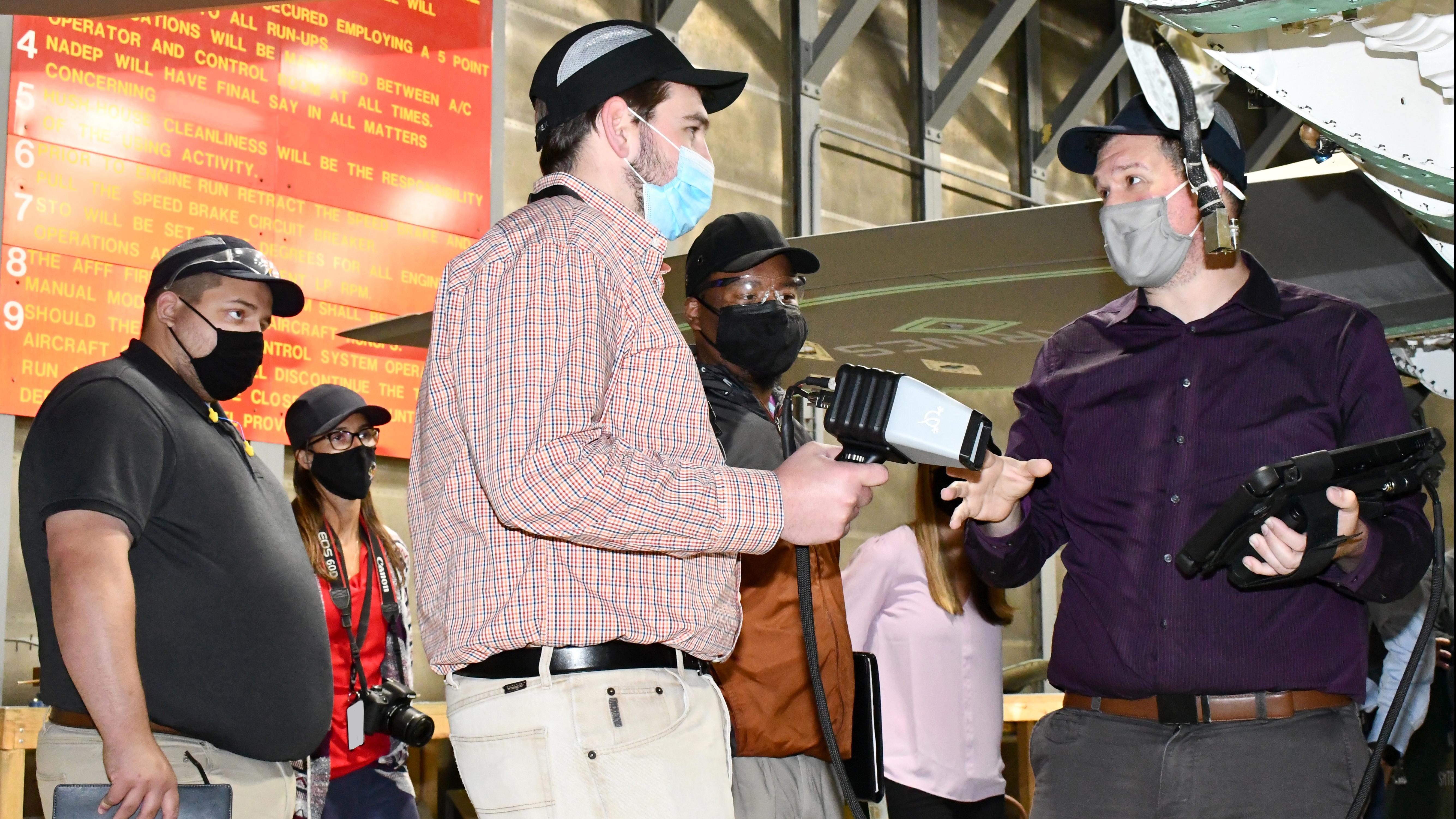 Austin Ziltz, right, lead engineer with Grey Gecko, leads a demonstration of the Grey Gecko Real-Time Inspection Tool, a handheld device that helps users inspect for corrosion by utilizing a mid-wave infrared camera to visually penetrate the aircraft coatings and record the images surface below. The F-35 program recently hosted the demonstration at Fleet Readiness Center East, using the F-35 maintenance trainer airframe located at the depot as one of the test subjects. 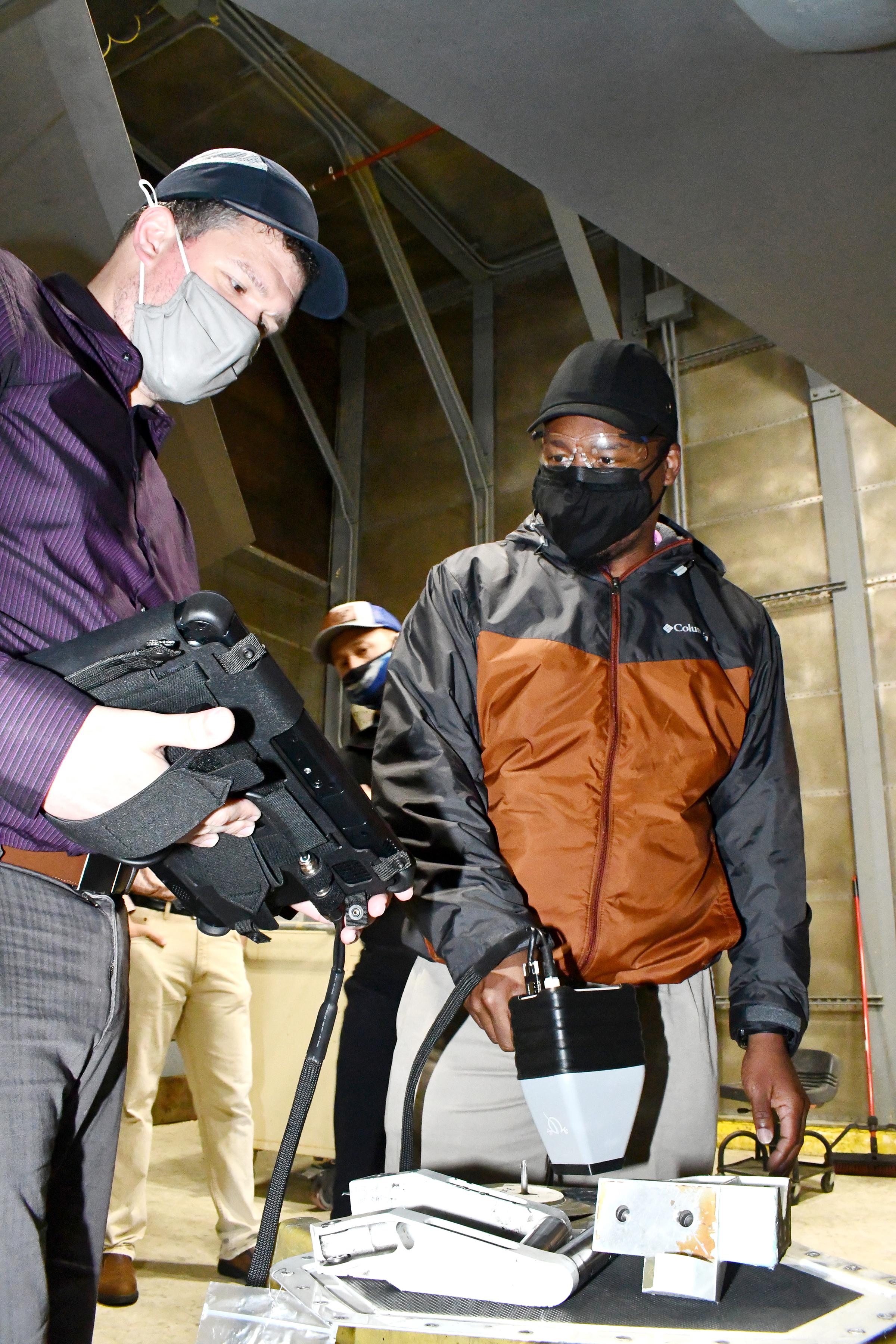