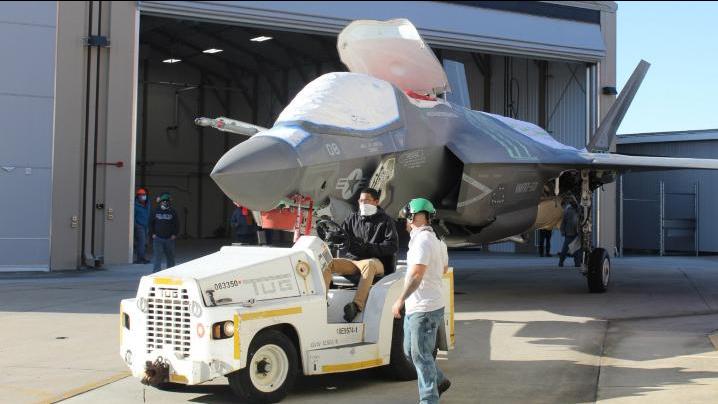 Fleet Readiness Center East (FRCE) marked a milestone in its support of the F-35B Lightning II aircraft when it successfully completed verification of the laser shock peening process and returned the first aircraft to undergo the procedure to the fleet.

Laser shock peening strengthens the aircraft’s frame without adding any additional material or weight, which would reduce its capability by limiting its fuel or weapons carrying capacity. The procedure helps extend the life expectancy of the fifth-generation F-35B fighter, which is the short takeoff-vertical landing (STOVL) variant flown by the U.S. Marine Corps. Verification of the process provides quality control by confirming it meets system-level requirements through a combination of inspection, analysis, demonstration and testing.

“The laser shock peening modification is essential to extending the life of the F-35B STOVL variant, and the ability to complete this procedure successfully allows FRC East to support this critical workload,” said FRCE Commanding Officer Col. Thomas A. Atkinson. “Standing up this strategic capability positions FRC East as a readiness multiplier for the future of Marine Corps aviation, and I’m proud of the hard work and dedication shown by the team in achieving verification of the process and returning the first laser shock peened F-35 aircraft to the fleet.”

FRCE completed construction on a $6 million, purpose-built laser shock peening facility in August 2019, and inducted the first F-35 to undergo the procedure in June 2020. Achieving the verification milestone required a cooperative effort by a multidisciplinary team that spans FRCE, the F-35 Joint Program Office, the aircraft manufacturer and the contractors that developed and conduct the laser peening procedure.

“The big picture here is that we set up a capability that has never been stood up before. We made STOVL history by completing verification of the laser shock peening procedure on the first Marine Corps aircraft inducted for the modification and returned to the fleet,” said Jeanie Holder, the F-35 Joint Program Office induction manager at FRCE. “As our local enterprise, we accomplished a lot to get the building stood up, get the equipment set up, and then roll the first aircraft into something that has never been done before.”

“We have a great partnership between the working entities, and that makes all the difference,” he added.

Brent Dane, director of laser technology at Curtiss-Wright, said the company is proud to be part of this milestone.

“Curtiss-Wright Surface Technology takes great pride in our contributions to returning the first laser peened F-35B to active service and we look forward to continued support of the F-35 fleet with this unique laser strengthening process,” he said.  “With the ever growing applications of this technology to critical military assets, we are honored to contribute to our nation’s defense and to help guard the safety of the warfighter.”

Having the laser shock peening process verified means FRCE and its partners conducted the modification for the first time and was then troubleshot, streamlined and improved, said Wes Klor, overhaul and repair supervisor on the F-35 modification line at FRCE.

“Our team got in there and completed the modification according to the engineering instruction, found any issues or trouble spots and documented these areas,” Klor explained.

“The artisans will take the instructions and work them, step by step, until they get to a point where they see an area for correction or improvement,” he continued. “Then they work with engineering to make changes to the engineering instruction on the spot and test out these solutions. Finally, they repeat the entire process successfully.”

“Verification makes the process repeatable,” he said. “You could take that instruction now and go complete this modification anywhere in the world if you had an LSP facility because all the steps are correct and in the right order. You have everything you need to do it.”

The verification marks FRCE as the first and only facility in the world to capable of conducting the laser shock peening modification on an F-35 aircraft; a second facility, Ogden Air Logistics Complex at Hill Air Force Base, Utah, is scheduled to come online in the near future, and FRCE has served as a model for successful standup, Holder said.

“We found all the potholes. We have broken ground for them to be able to fall in behind us and not have to do it the hard way,” she said. “It was always intended for FRC East to lead the way.”

The Air Force facility has even sent members of its workforce to observe and learn from the work done at FRCE, Rettenmair added.

“They’ve sent artisans here to see what we do,” he said. “They’ve sent planners and business office staff just to learn from this laser shock peening verification effort, and we’re willing to reach out to them and help them be successful.”

The skill and enthusiasm of the artisans on FRCE’s F-35 modification line make this type of success possible at the depot and beyond, Rettenmair added.

“The commitment of the team is unmatched,” he said. “The F-35 team as a whole is just hard to touch, with their loyalty and dedication to the success of the program. It’s great to see.”

All told, almost 15,000 labor hours went into verifying the process, Holder said, which sets FRCE up for success when it comes to working laser shock peening modifications for select F-35B aircraft in the future.

“This is going to be a major part of the FRC East F-35 workload for the next five to seven years,” she explained. “FRC East is the only facility that can do it besides the complex at Ogden, which will be providing the service on a limited, overflow basis because of their work on the F-35A, which is the conventional takeoff and landing variant flown by the Air Force. So it’s huge. Truly, in my opinion, it is a big deal.”

FRCE is the lead site for depot-level maintenance on the F-35B Lightning II and has conducted modifications and repair on the Marine Corps’ short takeoff-vertical landing variant of the aircraft since 2013. The facility has also worked with the F-35A (conventional takeoff and landing) and F-35C (carrier) variants.