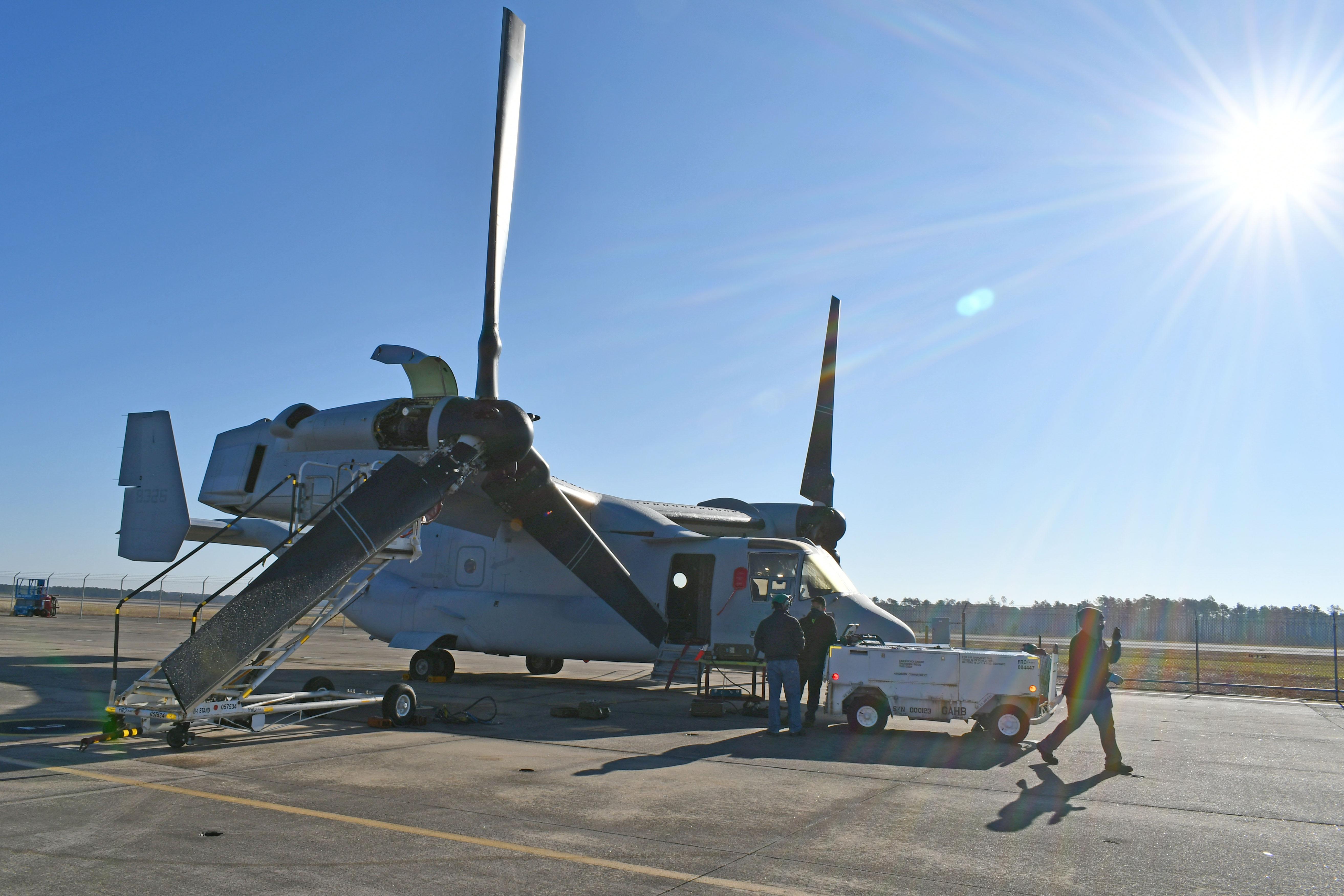 A V-22 Osprey undergoes final inspections on the FRCE flight line on January 15, just before completion. This aircraft’s 297-day turnaround time set a new milestone for the V-22 production line at FRCE.

Every field of effort has a standard to beat. Track and field had the four-minute mile. For baseball, the bar is 762 career home runs. For the V-22 Osprey production line at Fleet Readiness Center East, there was the 300-day turnaround time for returning the aircraft to their fleet customers.

On January 15, the V-22 line broke that elusive 300-day mark when the team returned its most recently completed aircraft in 297 days, far below the negotiated standard of 420 days.

V-22 production supervisors have credited much of the decreased overhaul time to the line’s recent adoption of a team concept. Under this new way of doing business, one airframes work leader is responsible for each aircraft, with the assistance of subject matter experts in the sheet metal and electrician trades. Together, these three experts make daily decisions on scheduling, parts and staffing needs.

“What it did was give us a driving force, a person who really knows what needs to be done on the aircraft and what is required to complete that task,” said Don McLean, V-22 first-line supervisor. “At our daily morning briefings, the work leader shares the information with the team, and we assign artisans to work based on that day’s needs. It keeps us laser focused on the line’s priorities.”

Parts are getting the same attention as personnel on FRCE’s V-22 line. The team maintains a spreadsheet detailing required parts and when they will be needed in the process. Supervisors say this long-view approach helps the team overcome potential obstacles before they become work stoppages.

“We’re identifying long lead-time parts, and as we achieve our milestones on the aircraft, we can look ahead and say we need this, when can we get it? And if we can’t get it, how can we overcome that obstacle?” said Matt Sinsel, V-22 production control coordinator. “We may have to find an engineering solution, locally manufacture a part, or take the part from another aircraft. We work through our obstacles to keep aircraft on track.”

Program leaders have predicted that turnaround times of less than 300 days will become more common on the V-22 line in the near future, due to improved parts availability and increased staffing of aviation professionals. The line’s ultimate goal is to meet the fleet’s demands for aircraft in 250 days. Andrew Rock, FRCE V-22 branch head, said that goal is attainable by working with the Defense Logistics Agency and the Naval Supply Systems Command, as well as applying more aviation maintenance professionals to each aircraft.

“Our negotiated turnaround time with Naval Air Systems Command is 420 days, but our target turnaround time to meet fleet demand is 250 days. There’s a huge difference in what the negotiated demand is and what we are now being asked to do,” Rock said. “Obviously, in order to do that, material must be available when it is needed and you have to apply more manpower, so we are currently in a ramp up to get the manpower on board, to get them trained, and then, regardless of the material condition of the aircraft, I think 250 days is attainable for most aircraft.”

The line’s achievements have not gone unnoticed by senior leadership at FRCE. Col. Thomas Atkinson, FRCE executive officer, visited several shop areas to thank the people whose efforts contributed to the milestone.

“The difference between the planned turnaround of 420 days and 300 days is about four months. You’ve done this four months faster than you were expected to,” said Atkinson. “You’ve given one third of an aircraft back to the Marine Corps. We do that three times, that’s like having an extra aircraft that doesn’t have to be purchased and that can be used for training and other missions.”

Supervisors said the new team concept and the success it has produced has energized employees working on the V-22 Osprey, and they predict the team will shatter other milestones in the future.

“This achievement tells me the entire V-22 team has bought in,” said Rock, crediting the artisans, estimators and evaluators, quality assurance, production controllers, and local manufacturing with contributing to the program’s success. “The entire team takes pride in what they do. Everyone is determined to meet all the goals this command throws at them, and so far they have done it.” 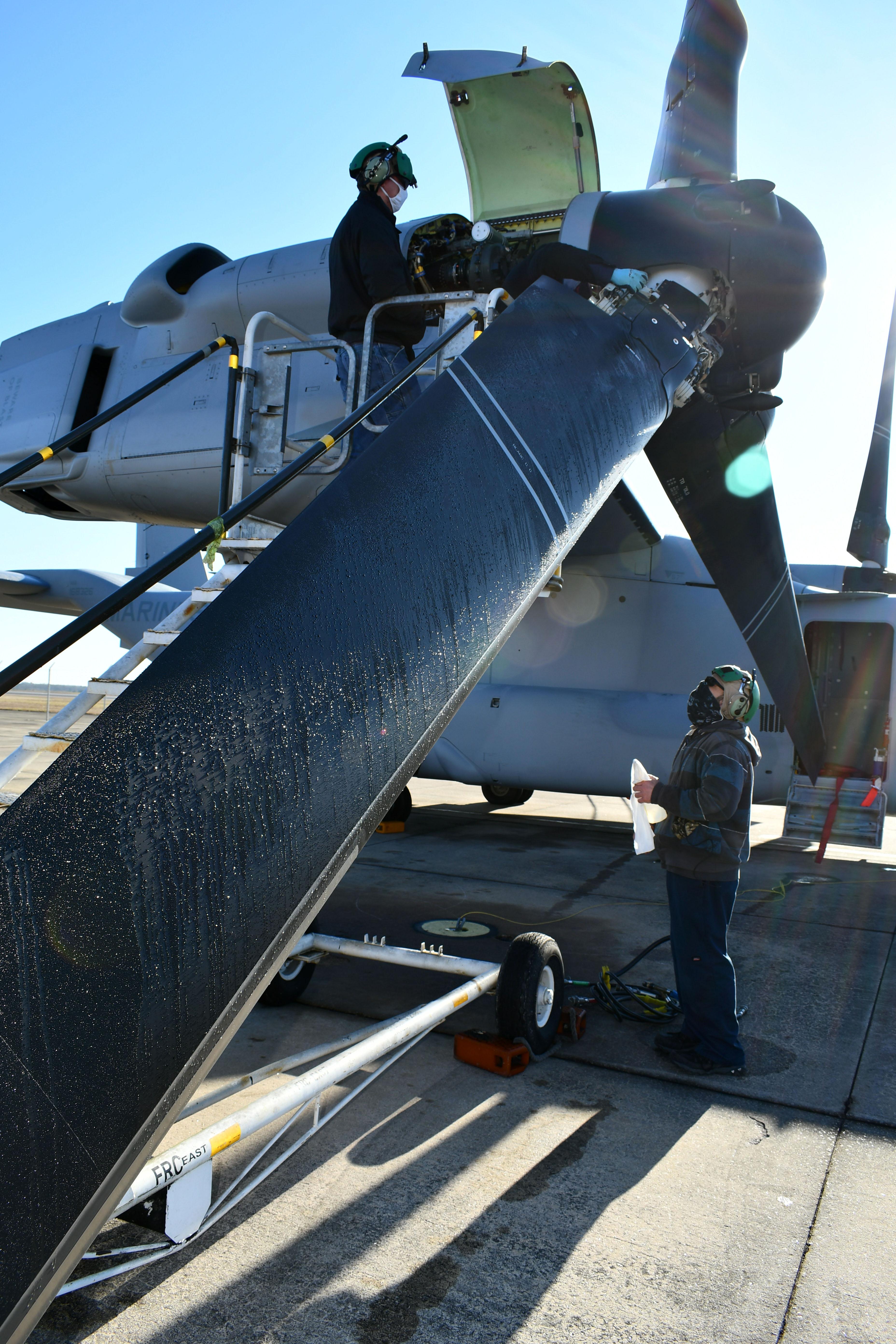 FRCE aircraft mechanics perform final maintenance functions on this V-22 Osprey before it is returned to the fleet. FRCE returned this aircraft in 297 days, 123 days before the negotiated completion date. The V-22 line credits the decreased turnaround time to improvements in staffing the aircraft, acquiring parts and teamwork.