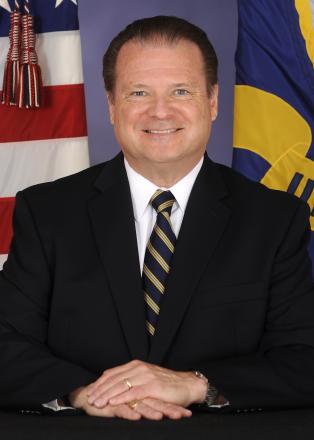 Mr. Lawrence Butts is the Deputy Director for Small Business at the Naval Air Warfare Center Aircraft Division (NAWCAD) Patuxent River.  He joined the Office of Small Business in 2019 after a tour on the Program Executive Officer for Tactical Aircraft [PEO (T)] staff as the Deputy PEO (T) for Portfolio Integration and Outreach, where he was responsible for championing numerous Speed to the Fleet initiatives.

Prior to this, Mr. Butts served in PMA-265 as the F/A-18 program office’s first Supplier Manager where he instituted culture changing best practices in market research, small business advocacy, and contractor performance reporting.  He also served as the PMA-265 Weapon Systems Integration Integrated Product Team (IPT) Lead and Automated Information Systems IPT Lead, where he led those teams in the procurement of new aircraft systems, in the integration of new weapon systems as well in the sustainment of fielded systems.

Earlier in his Navy career, he served in PMA-207, the Support/Commercial Derivative Aircraft Office as the Deputy Program Manager for the armed KC-130J Harvest HAWK program, and led the team that fielded the first combat ready, armed reconnaissance Hercules aircraft in action overseas. He also served as an IPT Lead fielding the first H-72 Lakota helicopters for the United States Naval Test Pilot School via a United States Army ACAT1 contract.  Additionally, he served as the UC-12 Huron IPT Lead for the legacy C-12 and C-12 Replacement Aircraft, where he competed, selected and procured the C-12W aircraft for the Marine Corps, their first new utility aircraft in decades.

Mr. Butts is a retired Marine Corps officer, who served over 30 years in the aircraft maintenance field, as well as a Navy electronics school instructor earning the Master Training Specialist designation.  His first experience with a small business came when he worked part time while in high school as a machinist’s helper at a small business defense contractor manufacturing Navy weapons loaders.  He is a graduate of Embry-Riddle Aeronautical University (BS, Aeronautical Science) and the Florida Institute of Technology (MS, Contracts and Acquisition) and is DAWIA certified in Program Management, Life Cycle Logistics and Information Technology.  He is a graduate of the NAVAIR Leadership Development Program and served on a rotation as a Technical Advisor in the NAVAIR Office of Small Business.  He also was the winner of the 2017 Department of the Navy’s Oreta B. Stinson Small Business Advocate Award and the 2016 NAVAIR Commander’s Small Business Advocate Award.  In his off duty hours, he volunteers as a member of the United States Coast Guard Auxiliary where he is the unit Public Affairs Officer and a Vessel Safety Examiner.