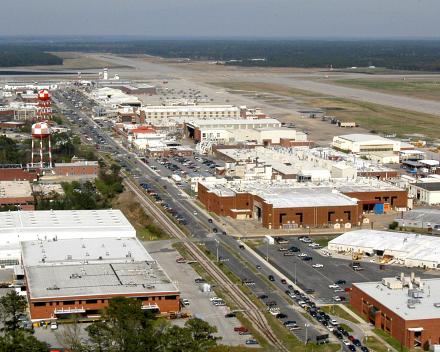 Fleet Readiness Center East (FRCE) opened its doors Dec. 16, 1943 as the Assembly and Repair Department at Marine Corps Air Station Cherry Point, North Carolina.  The name has changed over the years, but its focus remains the same -- to give our nation's warfighters the highest quality airframes, engines, components and services on time and at the best value.  FRCE is a Naval Aviation maintenance and repair depot under Naval Air Systems Command, headquartered in Patuxent River, Maryland. It is also the Department of Defense Vertical Lift Center of Excellence.

FRCE is North Carolina's largest maintenance, repair and overhaul and technical services provider with more than 4,000 military, civilian and contract workers. Many of the employees are members of the International Association of Machinist and Aerospace Workers, American Federation of Government Employees, and National Association of Aeronautical Examiners unions.