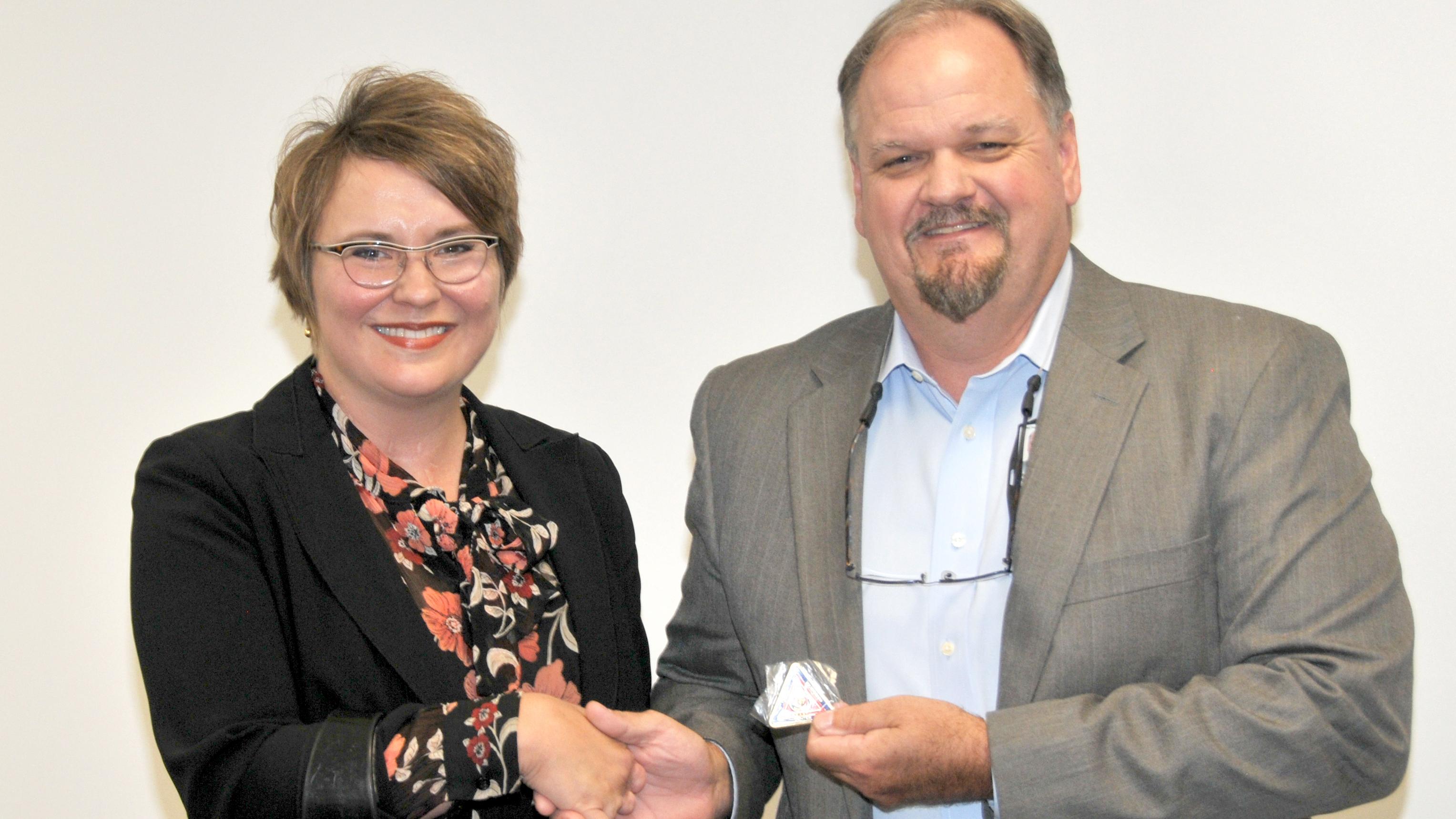 Deborah Moy said she never knew how strong she could be until she was put to the test. That test came in September 2008, when she and a friend were attacked in her Greensboro, North Carolina, apartment, where they were severely beaten and set on fire. Her friend died of his injuries, and Moy was rushed to the burn unit of a Winston-Salem hospital.

“I sustained third-, fourth- and fifth-degree burns over 70 percent of my body. And I had never heard of fifth-degree burns,” Moy said. “Apparently that’s what they call burns that go all the way down to the bone.”

Moy shared her dramatic story of survival and recovery with a standing-room-only crowd of Fleet Readiness Center East employees Oct. 24. The FRCE Individuals with Disabilities Advisory Team hosted a Lunch and Learn event with Moy as part of National Disability Employment Awareness Month.

“If we can learn from someone who has broken the code and chosen not to be a victim, but a victor over circumstances, we can share that story with others who are facing difficult challenges in their own lives,” he said.

Moy told the captivated audience that she woke in the burn unit after three weeks in a coma, with no memory of the attack. She would spend the next 18 months in a grueling routine of surgeries, medication and skin grafts. Because so much of her skin had been burned, doctors determined they would have to amputate her legs. Moy said the loss of her legs represented the lowest point in her recovery.

“After the surgery, the nurses would have to come into my room every hour or so to wrap and rewrap my legs, contorting my body in all these different positions to prevent bedsores. And this was really, really painful,” Moy said. “This is actually where I started to get stuck, because I started obsessing about why this had happened to me.”

Moy said a turning point came when she realized that her negative attitudes were affecting the doctors and nurses who were taking care of her. She recognized that, just in surviving, she had a lot of be thankful for. Although her experience was extreme, Moy said most people experience feelings of being stuck in their own heads.

“But becoming stuck can actually be a good experience, because it gives us the opportunity to start over and redefine ourselves,” Moy said. “For me, once I started to think of things in a new, positive light, the opportunities for my life actually became endless.”

Moy started taking a personal inventory of the good things in her life, including her family and friends, the medical team in the burn unit, and her intellect. Next, she started looking for people she could help. After seeing a commercial for the Wounded Warriors Project on a daytime television show, she realized that she could be an advocate for disabled veterans. Finally, she decided to pursue a lifelong dream of attending law school, earning a scholarship to the Elon University School of Law. She passed the North Carolina Bar Exam in 2016 and now practices at a New Bern law firm.

Moy told the FRCE audience that it wasn’t easy to change her negative mindset, but it was critical for her success.

“I don’t want to minimize the effort that went into my mental focus change, because it was a conscious, deliberate effort on my part to concentrate on the positive things in my life,” she said. “So when I find myself frustrated at having to wake up, put my legs on to go to the shower, take my legs off to take a shower, then put my legs back on to start my day, I have to think to myself, at least I have legs.”

FRCE employees said they were inspired by Moy’s courageous message.

“I was most taken by her ability to forgive,” said Pam James, data analyst with the Propeller Fleet Support Team. “I might be a positive person, and I might be able to overcome the trauma, but I don’t know if I could forgive someone who could do that to me.”

Logistics management specialist Terri Kaufman agreed Moy’s story was inspiring: “I was blown away by her courage and her ability to make a Plan B.”

As North Carolina's largest maintenance, repair, overhaul and technical services provider, Fleet Readiness Center East has a diverse workforce of more than 4,000 civilian, military and contract workers. The depot’s Equal Employment Opportunity office supports a wide range of programs and events that promote diversity and inclusion. The Individuals with Disabilities Advisory Team is one of seven diversity teams that offer opportunities like the Lunch and Learn throughout the year. 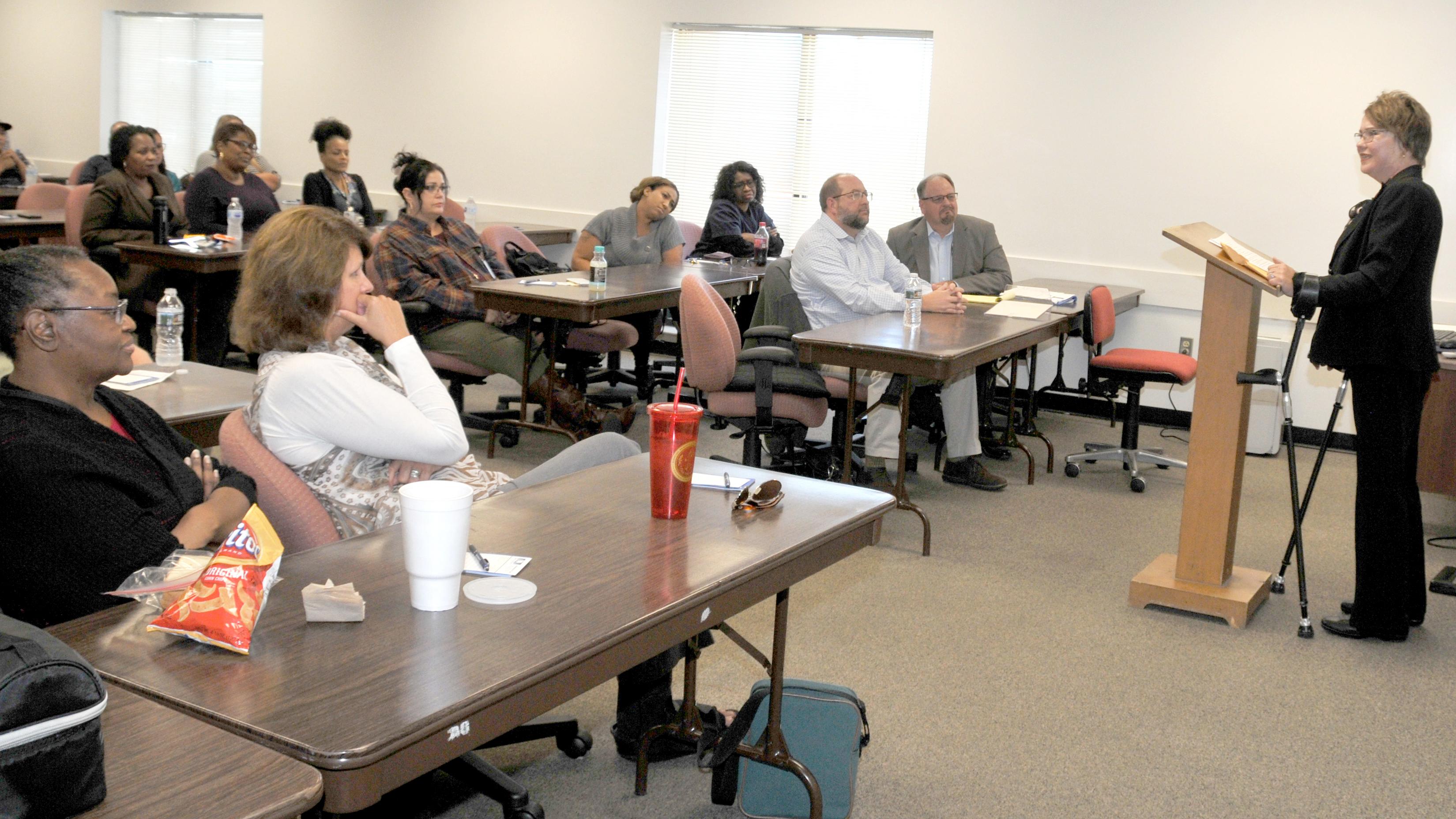