Cmdr. Deserine Price-Jordan was recently selected to serve as the highest level officer in one of the Navy’s Aerospace Maintenance communities.

Price-Jordan attributes hard work, taking great care of the people you work with, and having great mentors as her recipe for success. The pursuit of excellence will transcend a person’s race and gender, Price-Jordan said.

“I have always believed that if you have the ability and apply yourself to a goal, you can achieve anything you want,” said Price-Jordan. “I also believe in the power of mentorship, too often young or junior team members don’t have someone to look up to, someone who has accomplished something they can see themselves doing in the future. I was lucky and had great mentors and role-models and I am honored become that person for others.”

Price-Jordan’s first 16 years in the Navy were spent in various air traffic control positions. She earned a Bachelor of Science in Professional Aeronautics in 1997, and the same year, was selected as Air Traffic Controller of the Year, then Sailor of the Year, and was, subsequently, promoted to chief petty officer.

Price-Jordan was inspired by one of her role models, her cousin, U.S. Army Chief Warrant Officer Wanda Phillips, who remained a mentor throughout her career. CWO-4 Phillips retired as chief information systems technician after 38 years of service.

As a new ensign, Price-Jordan joined Electronic Attack Squadron (VAQ) 129, at NAS Whidbey Island, Washington, where she served as the detachment maintenance officer aboard the USS John C. Stennis (CVN-74). In 2005, while serving as assistant maintenance officer in Patrol Squadron (VP) 46, she received the Captain Winifred Quick Collins Award for inspirational leadership.

“After 35 years of service, I believe our Sailors — active and reserve, and the civilians who enable them are the true source of our naval power,” said Price-Jordan. “Respect should be both given and earned. If you work hard and take care of your people, treating them with positivity and dignity regardless of race, gender or nationality, you will be rewarded.”

Price-Jordan has seen many of the people she trained achieve great success, but one of the most rewarding so far, she shared, was inspiring her nephew, Tyreke Price, to enlist in the Navy. Boatswain’s Mate Tyreke Price now serves aboard USS Gridley (DDG-101).

In her current position, she is responsible for supervising the cradle-to-grave sustainment of eight different variants of operational support aircraft. She said she will put those multitasking skills mastered to use next summer, as she relieves Capt. Jon Voightlander as commanding officer, Naval Air Systems Command (NAVAIR) headquarters and NAVAIR Reserve program director.

“I’ve had the honor of working closely with Deserine for many years and she is one of the hardest working and dedicated officers you’ll ever find,” said Voigtlander. “I couldn’t be more excited about her selection, knowing she’ll undoubtedly make many lasting positive impacts. It’s a proud moment for the Navy!”

Price-Jordan offers the following words of wisdom for the next generation of female leaders in the Navy: Believe in yourself, surround yourself with friends that will hold you accountable and do not be deterred from your goals. 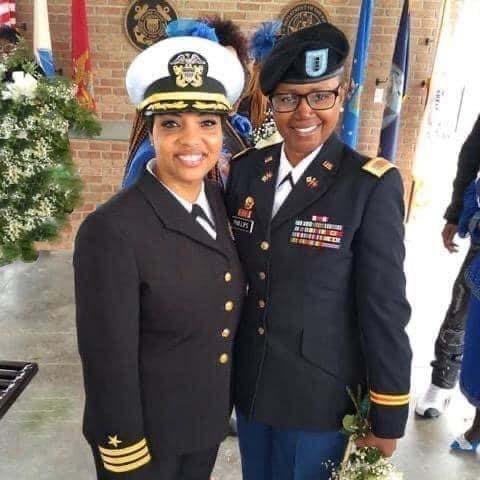 Price-Jordan was inspired by one of her role models, her cousin, U.S. Army Chief Warrant Officer Wanda Phillips, who remained a mentor throughout her career.