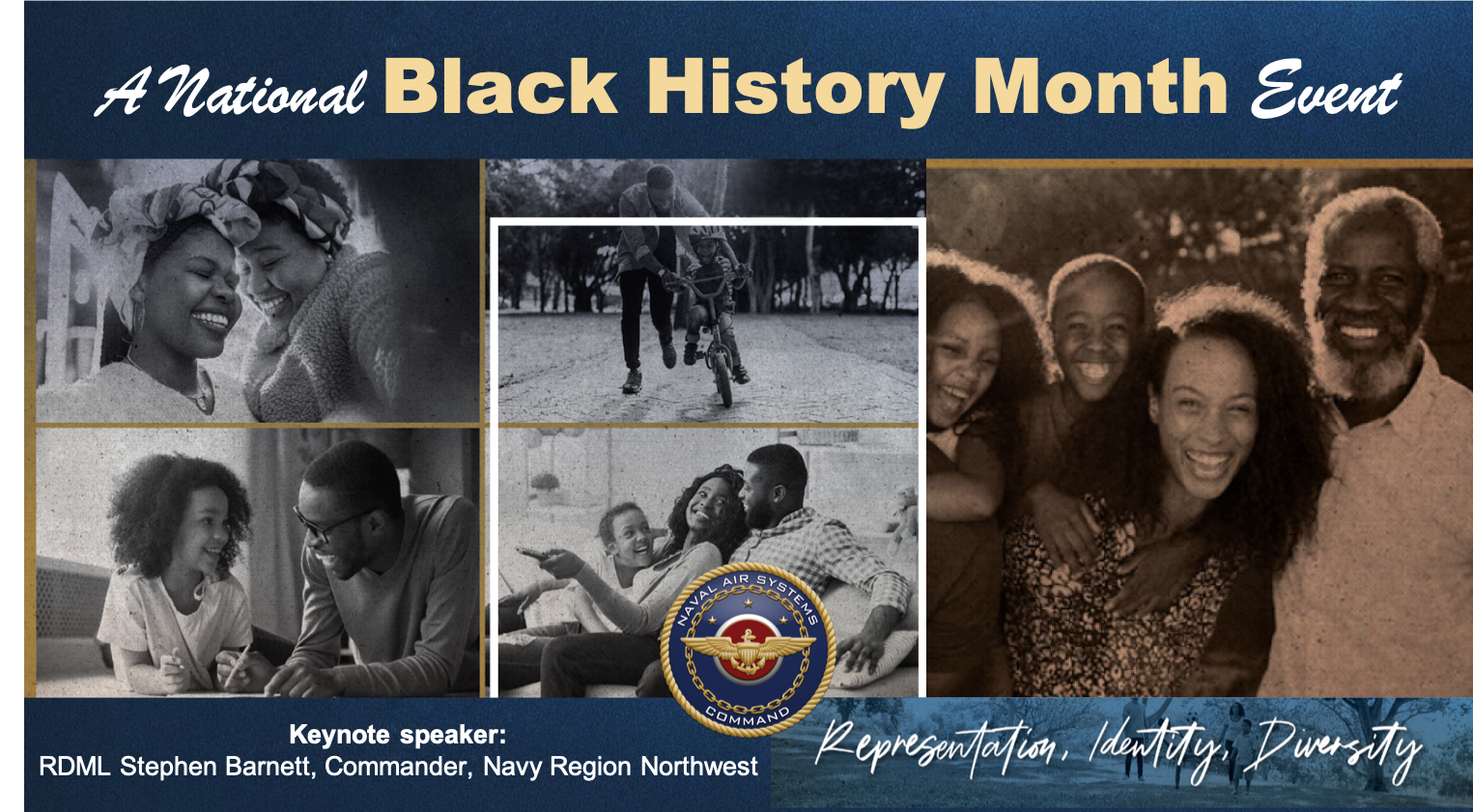 “This month is not just about black history. Black history is our history. This is American history,” said Rear Adm. Stephen Barnett, commander, Navy Region Northwest, at NAVAIR's virtual National Black History Month event Feb. 25, 2021. Barnett shared some highlights of black history within naval aviation and the importance of diversity within the Navy at the event, with a theme of “The Black Family: Representation, Identity & Diversity." (U.S. Navy graphic)

The importance of representation, identity and diversity, particularly within the Navy family, were the focus of a national virtual Black History Month event Feb. 25.

Barnett is one of the just 8% of black Navy officers, a fact that isn’t lost on him.

“The black men and black women who came before me paved the way,” he reflected. “Just one generation before me, it was nearly unthinkable for a black person to become a naval aviator. I wouldn’t be here today with a star on and my actual wings on if it wasn’t for a bunch of aviation giants that went before me.”

He credited his success to his family, mentors and fellow military members as he shared a presentation of several inspiring people of naval aviation.

“I love mentoring. That’s what helped me,” he said. “What helped me was people who didn’t look like me. And most of my mentors told me what I needed to hear, not what I wanted to hear.”

Mentoring, having open and honest conversations, and leading by example are just three things he suggested to increase inclusion in the workplace.

Barnett and several of the executive champions of NAVAIR’s African-American Pipelines Action Team (APAT), which hosted the event with NAVAIR’s Equal Employment Opportunity Office, addressed the importance of recruitment and retention.

“As the country becomes more diverse, it makes sense for our military to become more diverse for the people they actually represent and serve,” Barnett said. “Monolithic organizations cannot and will not survive.”

Jerry Short, one of the fewer than 11% of black Senior Executive Service members across the federal service and an APAT champion, said African-Americans are transforming the face of America.

“The fervor and ingenuity of the African-American populace is remarkable, and those within our workforce contribute to the success and execution of NAVAIR’s mission of supporting the warfighter,” he said.

NAVAIR is comprised of 8.5% black civilian employees. The APAT continues to work to increase recruitment and retention, maximize development opportunities, and identify and eliminate career progression barriers. The team is one of seven diversity action teams at NAVAIR.

“Bringing together our teammates from diverse backgrounds allows us to leverage our various thoughts and experiences, and this can be a catapult for the innovation and agility we need to effectively accomplish our important mission,” said APAT executive champion Rear Adm. John Lemmon.

For Barnett, a Tennessee native, diversity is like a gumbo: “You’ve got everything. It’s making a better meal. It’s having a diverse thought process and being accepting of diverse thoughts and including them in the process,” he said.

Black History Month is observed each February to celebrate the accomplishments, achievements and successes of African-Americans. This year’s theme was “The Black Family: Representation, Identity & Diversity."