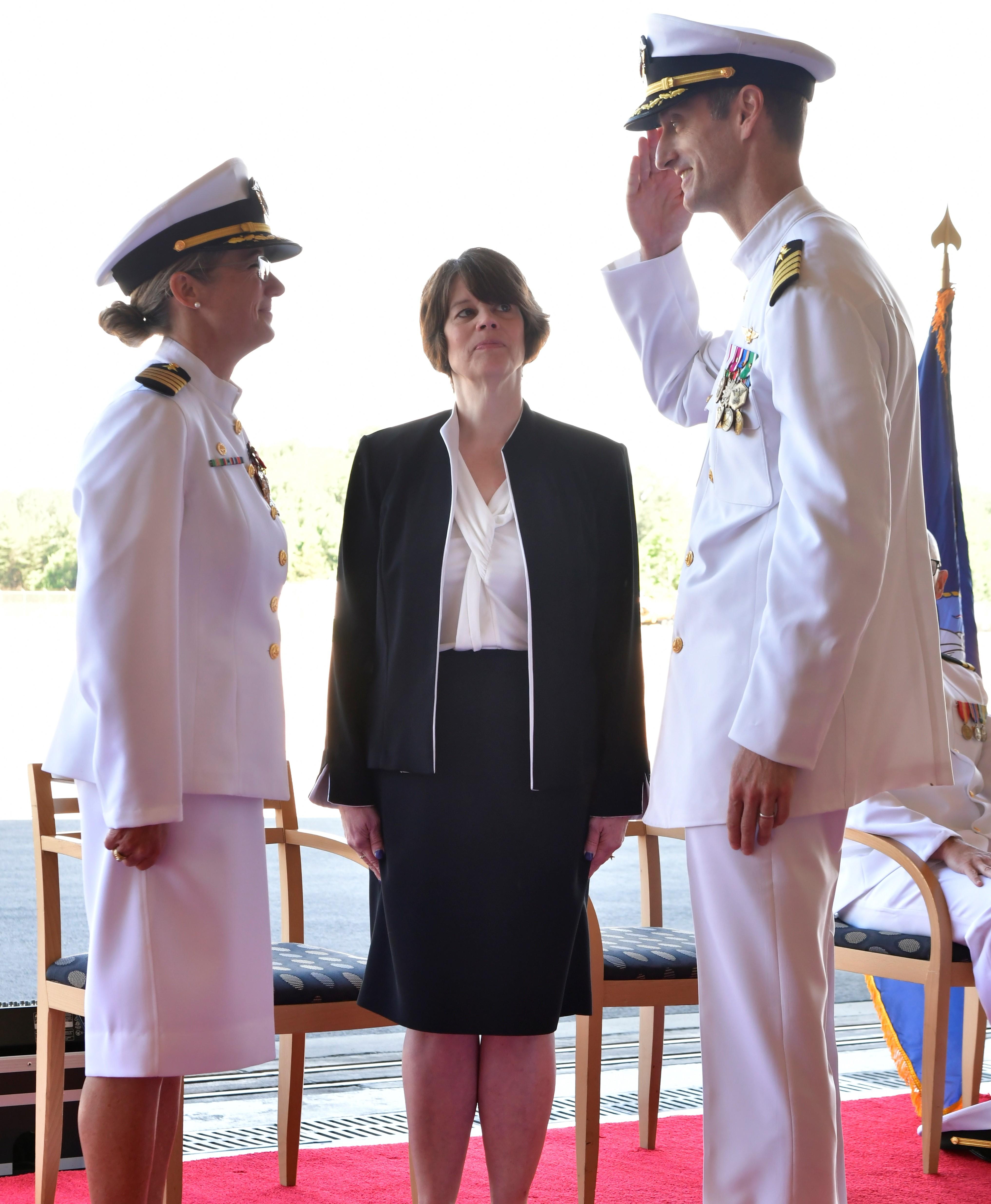 Capt. Lisa “Peppy” Sullivan turned over leadership to Capt. Kevin “Tripper”  McGee at a ceremony with more than 200 family, friends and colleagues at the Air Test and Evaluation Squadron One (VX-1) hangar.

Presiding official, Marci Spiotta, acting Program Executive Officer for Aviation Common Systems and Commercial Services (PEO(CS)), credited Sullivan’s leadership style, focus on her people, and her commitment to readiness and delivery of capabilities to the warfighter as keys to PMA-205 mission accomplishment.

“It is my honor to be here today to celebrate your dedication, focus and commitment as an expert leader,” said Spiotta. “The programs within the PMA-205 portfolio directly support the warfighter, from highly technical training systems to training ranges that prepare our warfighters for the high end fight.”

Spiotta said that Sullivan left an indelible mark on the PEO as a successful, collaborative leader in charge of a myriad of programs operating under heavy Congressional oversight, while navigating the complexities of COVID and the hybrid work environment – all of which she scaled with ease.

Spiotta was among the many female leaders from the fleet and Patuxent River who participated in the event. Capt. Jill Cesari served as retirement speaker and sideboys included Capt. Anna Boyd, Capt. Margaret Wilson, Capt. Marilisa Gibellato and Lt. Cmdr. Bridget Torem.

“This speaks volumes of the progress society and Navy has made in equality and diversity; but make no mistake, these ladies represent the best of the best regardless of gender,” said Sullivan.

As program manager, Sullivan successfully led a diverse and inclusive team supporting the acquisition and life cycle support of training systems, simulators and training ranges recapitalization and improvement. She oversaw the space transformation pilot, a program that set the path for future remote work and flexible office spaces, and served as a model to the rest of NAVAIR during the COVID-19 pandemic. “At the beginning of my tour I challenged each one of you to stop thinking of training as an enabler and start thinking of it as lethality,” Sullivan said to the PMA-205 workforce. “I have always insisted that training equals lethality and over the last three years we have achieved our mission, with urgency, to get better training to the fleet faster.”

Sullivan oversaw the installation of the new Normobaric Hypoxia Trainer as well as the mask on breathing device trainer, both aimed at reducing potential physiological episodes ─ a top safety priority for the Navy. She also spearheaded the expansion of the Navy’s live virtual constructive and distributed mission training and was at the forefront of many high fidelity linked training events, delivering hundreds of training systems to the fleet during her three-year tenure.

Sullivan will retire after more than 26 years of dedicated service to the Navy.

McGee, a Duke University graduate, brings a wealth of experience to the job with a career that spans more than 24 years of Navy service. McGee participated in the U.S. Naval States Naval Test Pilot School (USNTPS) Cooperative Program and graduated from the Air Force Institute of Technology with a master’s degree in aeronautical engineering.  After completing USNTPS, he was assigned to Air Test and Evaluation Squadron (VX) 31, where he led F/A-18E/F and EA-18G software and weapons test programs and was selected as the 2008 VX-31 Test Pilot of the Year.

McGee was then assigned to the VFA-41 Black Aces, where he served as an operational department head and deployed supporting Operation Enduring Freedom. He subsequently transferred to the F-35 Joint Program Office (JPO) where he served as the pilot training integrated product team lead and the joint technical data lead, supporting the initial standup of F-35 pilot training at multiple locations.

In 2014, he returned to China Lake, California to serve as the military deputy at the F/A-18 and EA-18G Advanced Weapons Laboratory, where he led developmental flight test efforts. In 2016, McGee transitioned to a program management role as the T-45 integrated product team lead at the Naval Undergraduate Flight Training Systems program office. His team was recognized with consecutive NAVAIR Commander’s Awards for outstanding acquisition performance and fleet responsiveness while mitigating T-45 physiological episodes.

Prior to assuming command of PMA-205, McGee served as the director of the Air Systems Group of the Naval Air Warfare Center Aircraft Division..

“PMA-205 is a program office with a warfighter capability, affordability and availability focus,” said McGee. “I am both proud and excited to join such a talented and diverse tea and look  forward to achieving our mission with determination and resolve.”