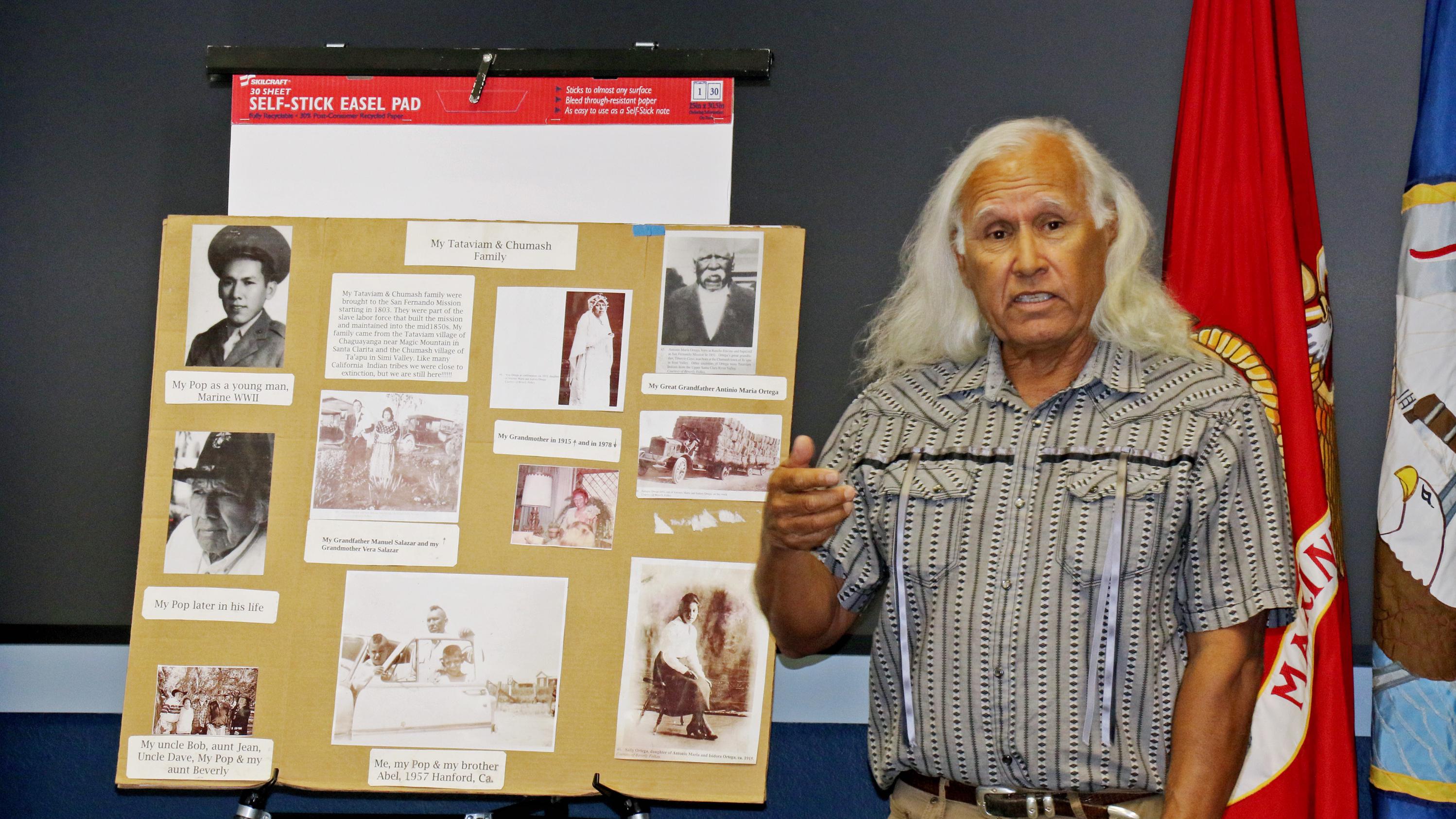 Alan Salazar speaks about his personal history and the rebirth of the Chumash tomol during a National American Indian Heritage Month event in Point Mugu, California, on Nov. 7. (U.S. Navy photo by Kimberly Brown)

The events, hosted jointly by the NAWCWD American Indian/Alaskan Native Diversity Advisory Team and the Equal Employment Opportunity and Diversity Division, featured Alan Salazar, a founding member of the Chumash Maritime Association and native educator. Salazar spoke on both his personal history and the history – and modern life – of the Chumash tomol, a traditional ocean-faring canoe.

Salazar, who traces his family back to the Chumash village of Ta’apu in modern-day Simi Valley and the Tataviam village Pi’ing near Castaic, California, has spent much of his adult life working with children and educating them about native culture. In the 1990s, Salazar studied archeology and became serving as a Native American monitor and consultant for projects throughout the Southern California area.

In partnership with the Santa Barbara Museum of Natural History, Salazar and other members of the Chumash Maritime Association used detailed notes and drawings to construct the first working tomol in modern times in the late 1990s. Tomols are plank canoes once used by the Chumash people to fish and to transit between the mainland and the Channel Islands.

“We built plank canoes because we didn’t have big trees,” Salazar said. “So when driftwood would come down the coast, we would split them for planks and glue them together with pine resin and natural tar.”

By the 1830s, with the rise of the California Mission system, Salazar said, the Chumash stopped building and using their traditional canoes. They instead were forced to work for the missions.

In the 1970s, the museum built a replica canoe, which sailed around Santa Cruz Island before being put on display. In the 1990s, Salazar and his team built their canoe, which they’ve used to relearn the skills of how to build and use the tomols but also as a way to connect their history with their present.

“In 2001 we made our first crossing from the mainland to Santa Cruz island,” Salazar said. “It was the first time in more than 150 years since a traditional tomol had made that journey.”

The team has made the transit 12 times since then. They try to go annually in the fall, but the weather doesn’t always cooperate, Salazar said.
Ultimately, the journey is a spiritual one for the paddlers. It’s a way to connect with their ancestry and pass on their culture to their children, he said. Their culture is not history; it’s vibrant and alive – and relatable.