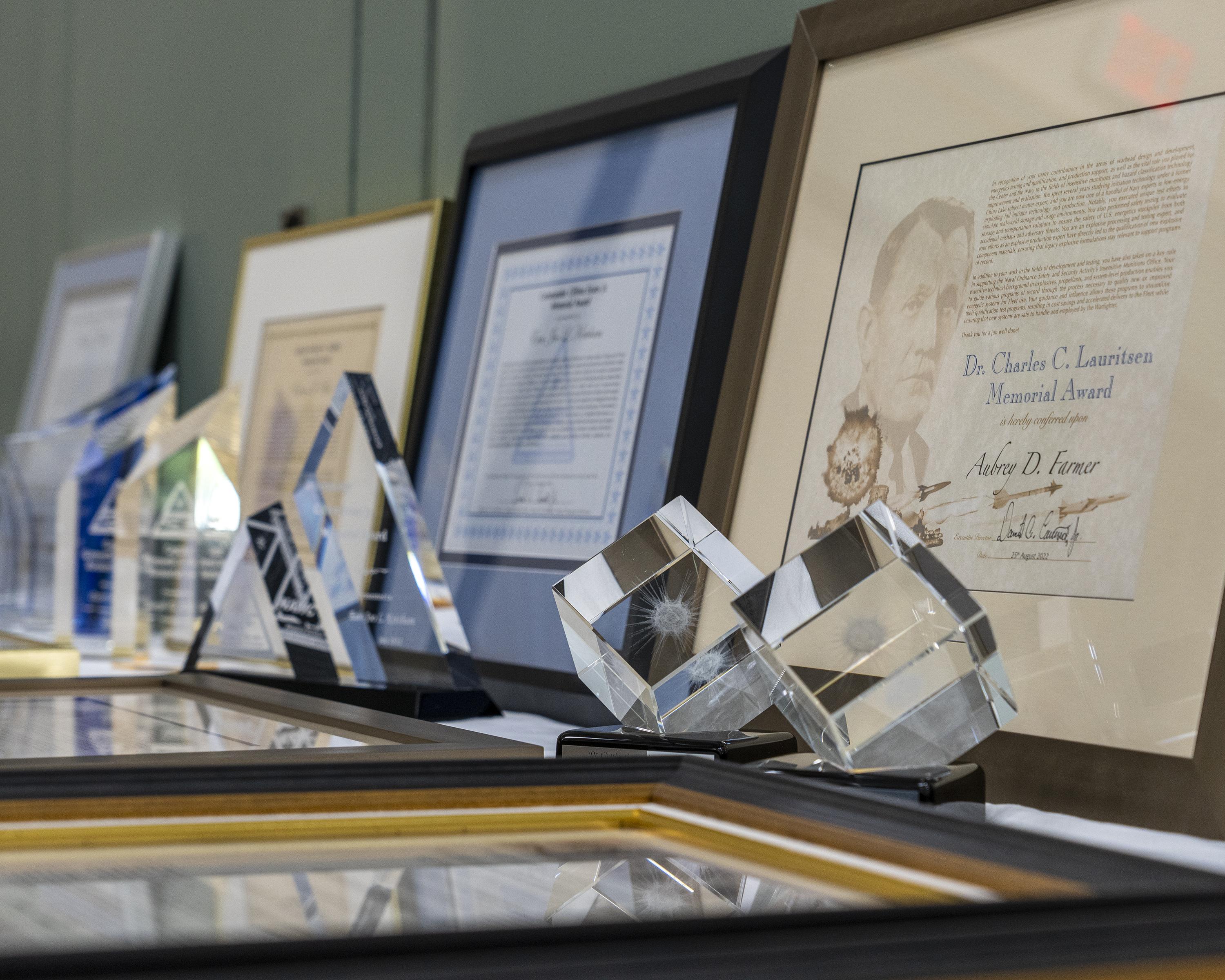 The Honorary Awards are named in honor of several men and women who made a difference to the Navy and the nation in the nearly 80 years since NAWCWD’s predecessor commands launched at China Lake and Point Mugu. Some of the awards date back to the 1950s and 60s.

“I can’t help but think of the traditions that these awards reflect,” said Dan Carreño, NAWCWD commander said in his opening remarks. “I grew up with this organization, and looking back at who these awards are named for – they made their marks on history. So do the winners here today.”

He went on to note that selecting a winner from the nominees is one of the harder parts of his job, because all of the nominees, and the teams behind them, are doing such critical work in support of the nation’s warfighters.

The Captain Kenneth A. Walden Memorial Award, which honors Walden’s personal involvement in providing motivation and leadership to others to achieve technical and operational objectives, recognizes those who have made significant strides in personal development, career advancement or have contributed to mission success in NAWCWD’s technical and operational goals within the last three years. Awardees for 2022 are Gregory Francis, Joseph Hibbs II, Alan Kang, Darrin Rice, Richard Rolniak, and Eric Sievert.

The Commander Clifton Evans Jr. Award is reserved for those civilian or military employees who have made significant contributions in information warfare including electronic warfare, countermeasures, and counter-countermeasures. Recipients for 2022 are Robert DeYong, Eun-Joo Ketcham, and Richard Shim.

Rick Kelly, Dr. Mark Mason, and Claire Velicer received the Dr. L.T.E. Thompson Memorial Award, which is NAWCWD’s highest recognition for outstanding individual achievement. China Lake’s success in the field of ordnance was due in great part to Thompson’s initial guidance and to his skill in integrating military and civilian personnel into an enthusiastic, effective group. Candidates are selected based on their outstanding contribution to the advancement of ordnance toward the fulfillment of the NAWCWD mission and must have already received a Michelson Laboratory Award.

The Dr. William B. McLean Memorial Award pays tribute to McLean, technical director at China Lake from 1954 to 1967. This award recognizes outstanding creativity among employees in furthering NAWCWD’s mission as evidenced by significant inventions. This year’s recipients are Benjamin Blazek, Anthony Kunkel, and Shawn McGann.

Aubrey Farmer, Scott Fuller, and Kenneth Young received the Dr. Charles C. Lauritsen Memorial Award. This award recognizes outstanding individual achievement in the advancement of technology in energetic materials, ordnance, propulsion, and fusing or career achievement in the field of energetics, and honors Lauritsen’s successful development and utilization of rockets and missiles, and the establishment of the civilian-military team concept in the Navy lab structure.

The Gwendolyn Elliot Hunt Memorial Award recognizes those who have made significant strides in personal development, academic achievement, career advancement and/or mission accomplishment. Hunt was a leader and technical professional who rose to each challenge in her professional and personal life and is said to have made improvements to the efficiency and quality of life at NAWCWD. This year’s honorees are Marissa Bell and Alisa King.

The Equal Employment Opportunity Awards recognizes employees and supervisors who have made outstanding contributions to NAWCWD’s EEO program through excellence in leadership, imagination and perseverance. Norelle Swanson won the EEO Award and Pamela Howard won the EEO Supervisory Award.

Rear Adm. Keith Hash closed out the ceremony, noting that he is one of the newest people at the NAWCWD, having taken over as NAWCWD commander June 30.

“What an awesome opportunity to be a part of this awards ceremony,” he said, noting how the breadth and depth of the awards reflects the complexity of the command. “We are standing on the shoulders of giants, people who did amazing things…. The successes we’re celebrating today, they couldn’t have even envisioned when they set us on this path.”