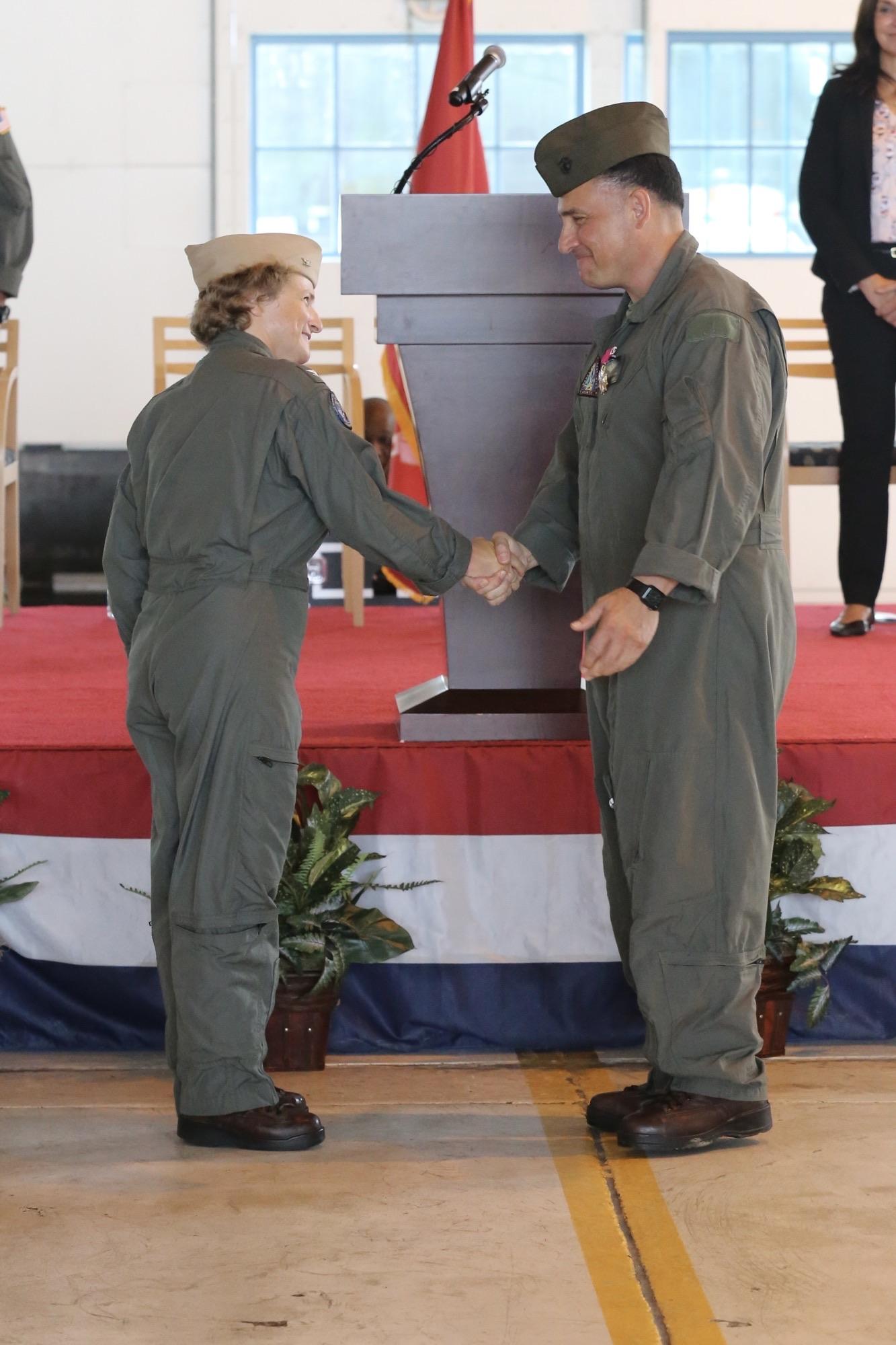 Somerville relieved Commodore Col. Richard Marigliano, who oversaw the developmental air wing – the Navy’s largest – that conducts testing for every aircraft in the Navy and Marine Corps.

“Over the past few years, this wing delivered our Navy and Marine Corps capabilities including Next Generation Jammer, the CH-53K heavy lift helicopter, and the Joint Air-to-Ground munition to name a few,” said NAWCAD Commander Rear Adm. John Lemmon who presided over the ceremony. “Its leadership and our people make this team world class.”

“This test wing is charged with an important mission: deliver lethality to our Sailors and Marines,” said Somerville. “It’s a huge challenge but this team is up for it – flight test is the ultimate team sport.”

Somerville is an EA-6B Prowler and EA-18G Growler naval flight officer with more than two decades of experience in operational and developmental aviation. The Massachusetts native deployed to support Operations Iraqi Freedom and Enduring Freedom in the Global War on Terrorism, and flew with Electronic Attack Squadron (VAQ) 141 where she led the Growler’s maiden deployment aboard USS George H. W. Bush (CVN 77). She also served as commanding officer for two developmental test squadrons dedicated to weapons and tactical aircraft: Air Test and Evaluation Squadrons (VX) 31 and 23, and held various acquisition roles at Naval Air Systems Command. She is a U.S. Naval Test Pilot School graduate and earned bachelor’s and master’s degrees in aeronautical engineering from the Massachusetts Institute of Technology and the Air Force Institute of Technology.

“This tour was the most challenging and rewarding over my 27 years as a Marine,” said Marigliano. “This test wing has big jobs ahead of us advancing naval aviation – [Capt. Somerville] is the right leader to move it forward.”

During the ceremony, Marigliano retired from the U.S. Marine Corps after nearly 30 years of service. The CH-53 Stallion pilot led the air wing through its largest reorganization in more than 30 years, and through the COVID-19 pandemic. The New York native previously served as the military assistant for the Assistant Secretary of the Navy for Research, Development, and Acquisitions, and various other acquisition roles at Naval Air Systems Command. He also served as commanding officer of NTWL’s rotary test squadron, HX-21. He worked in multiple positions on the CH-53 developmental test team, including the government flight test director of the new CH-53K program. He is a U.S. Naval Test Pilot School graduate, earned a bachelor’s degree in aeronautics and applied mathematics from Dowling College, and a master’s degree in aircraft systems from the University of Tennessee.

The Naval Air Warfare Center Aircraft Division is the Navy’s largest warfare center, employing more than 17,000 military, civilian and contract personnel. It operates test ranges, laboratories and aircraft in support of test, evaluation, research, development and sustainment of everything flown by the Navy and Marine Corps. Based in Patuxent River, Maryland, the command also has major sites in St. Inigoes, Maryland, Lakehurst, New Jersey, and Orlando, Florida.