During World War II Rosie the Riveter, the iconic and dynamic representation of a changing time, graced the cover of the Saturday Evening Post. In 1943, Norman Rockwell used Rosie to depict the women producing munitions in factories and shipyards supporting the warfighter.

Throughout history, women serve heroically on the home front as well as on the frontlines during every major conflict. Today the U.S. Navy’s growing trend shows an increased number of females serving in aviation-related careers. Navy officials say increased female representation is a benefit of modern platforms, improved female retention, and changes in Navy-wide policies such as parental leave, and post-childbirth operational deferments.

Every August 26th, the U.S. celebrates Women’s Equality Day. It is the anniversary of the 19th Amendment’s certification and recognition of women getting the right to vote. In honor of Women’s Equality Day, allow me to introduce some modern pioneers from the “Golden Eagles” of Patrol Squadron NINE (VP-9).   VP-9 is one of four Whidbey Island based fleet patrol squadrons equipped with the P-8A Poseidon, the U.S. Navy’s latest Maritime Patrol and Reconnaissance aircraft.

“My grandfather said, ‘mechanics work outside and work hard.’” Petty Officer 3rd Class Kirsten Smith-Wagner of Moreno Valley, Calif. stated “are you sure you want to do that?”

Smith-Wagner is a plane captain and aviation machinist’s mate performing maintenance on the engines of the P-8A.  She monitors the operation of critical systems and performs periodic inspections to ensure all systems are operating as advertised. “The more you see, the more you learn,” she said. “Even if it’s not your platform or platform specific.”

Airman Carson Church of Rantoul,Illinois, is an aviation structural mechanic, focusing on landing gear and tires. She said her interests are anything with hydraulics, and her inspections require her to check for signs of fatigue and corrosion.  “Since the P-8A is so new there aren’t challenges with bare metal and corrosion,” she said. “It’s cool seeing other platforms and evaluating them for corrosion. With a structured maintenance strategy, which includes frequent, regularly scheduled depot maintenance, the P-8A continues to perform well worldwide. Church explained to us that her shop is made up of mostly women.

Petty Officer 3rd Class Jordan Mathews of Bowling Green, Kentucky, an aviation ordnanceman, is responsible for loading weapons and sonobuoys onto the P-8A. The aircraft can carry more than 100 sonobuoys and may also be armed with MK-54 Torpedoes and AGM-84D Harpoon missiles. “My ‘aha’ moment happened as I was looking at the Army helicopters,” she said about the Paris Airshow. “They carried rockets, and I thought to myself…‘this is why I love my job.’ Not many people can say they load ordnance on a weapon system like I do, especially females.”

Although officials report that changing attitudes and standards make Navy careers attractive to female recruits, which is believed to have a positive impact on retention numbers, there is no clear indication of how much each factor influences the trend.The Navy leads all the services, with one in four Navy recruits being female.

Petty Officer 2nd Class Yesenia Hernandez of Salinas, Calif., said her Navy career has given her stability and allowed her to travel. As a logistics specialist, she has served at locations in Japan, Iceland, and Sicily. She admits that while on active-duty she has been afforded the opportunity to go places and experience things that she might not have as a civilian. When asked about being a female in the Navy, she said, “Everyone in our squadron plays an important role in the mission.”

She will soon decide if she’ll continue her career with the Navy since she is close to the end of her four year commitment.

“I’ve been in the U.S. Navy longer than most of them [the VP-9 crew] have been alive,” said Aviation Electricians Mate Senior Chief Petty Officer Mary Chesnutt of Decatur, Illinois. She spent her 26th wedding anniversary on duty.  With close to 27 years of service, she recounts on her decision to get out of the Navy, after her first four years of service and her subsequent re-enlistment 2 years later. “I missed the camaraderie.” she said.

Things have changed since she first entered the service, she explained. She said harassment isn’t tolerated, and females do hold higher levels of responsibility. “The Navy and the military is what you make it,” she said. “If you don’t want to excel, you’re not going to.  If you want to succeed and move up in rank you will.” 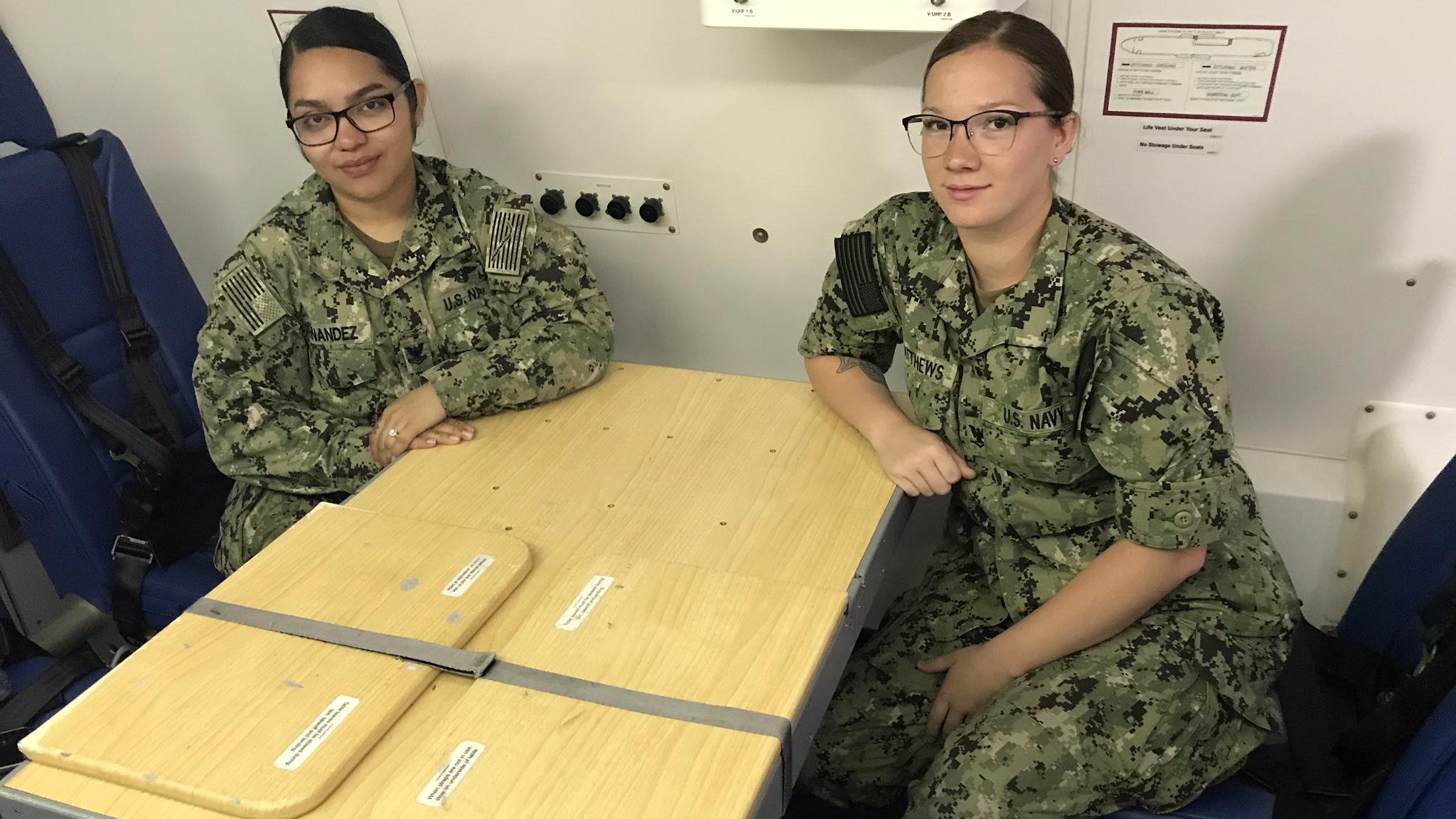 While seated inside the P-8A Poseidon, the U.S. Navy's patrol and reconnaissance aircraft, Petty Officer 2nd Class Yesenia Hernandez (left) and Petty Officer 3rd Class Jordan Mathews (right) said, "their jobs play an important role in keeping the Poseidon flying. U.S. Navy officials say the increased female representation in aviation careers is a benefit of modern platforms, such as the P-8A Poseidon, as well as changes in Navy-wide policies such as parental leave, and post-childbirth operational deferments.